Saturday,  the bantams have gone, not sure whether to feel sad or relieved. I shut them up in the coop this morning so they could be transported safely. The Bells brought the long trailer, this afternoon so the three runs and the coop fitted perfectly.  So now my pair will up on the top farm with their hens.  Rosina says that the new people who have just bought the big house up there have three peacocks as well.  The three having invaded the farm in the last few days.  I do not like the sound of peacocks but hopefully their sharp cry will not carry down to the village.

Friday Jo and I spent an hour discussing on the phone, which of our many animals quietly died in their sleep in the past but only came up with a couple.  That is the one thing I share with Jo, an accumulation of animals over time.  She has an old blind sheep, a 25 year old horse, four feral cats in her barn and an old dog.

But I did manage to get her to phone the new church man to see if the church will renew Rod's contract  Apparently boundaries have been moved in the district and there has been a reshuffle in the authorities of the church.  York has had a new Bishop as well - Steven Cottrell.

Today is Sunday so I pick up the thread.  After the bantams had gone, looked through the window to see the sheep once more amongst the graves.  They were quite bold peering over the wall, and I thought maybe like the goats of Llandudno they were going to leap down into the garden.  Sodding creatures was my first thought as I put on my coat to go round to Rachel's.  They weren't in, so I wandered back, stopping at  my friend's house if she had a phone number for them but she had not.  One good thing about mobile phones, people normally carry them round but no luck.

So as the very unofficial 'keeper of the graveyard'.  Thought 'that's it', just let the sheep run around and eat the grass and poor Rod will be out of a job.  Anyway an emailed apology this morning from Rachel, she did not know how the sheep had escaped from the river bank field but a man is coming today to put in a fence.  It must be embarrassing for her of course but livestock are great explorers.  As the peacocks will testify to I expect.

After all this I opened the Amazon box from my son, two large boxes of Lindt Lindor chocolates which soothed the day, bless him.  He is type 1 diabetic but still eats chocolate himself now and then.  He knows how to measure his insulin against glucose, and now doesn't even have to take blood tests by the needle but I think by his phone.

Just noticed Margaret Rayner, the artist I had tagged at the end of this blog.  Her father was an artist and she was one of five artistic daughters.  Margaret painted a lot of church interiors, but the following painting somehow is a very powerful rendition.  It encapsulates a strong church like medieval  feel that rather frightened me. 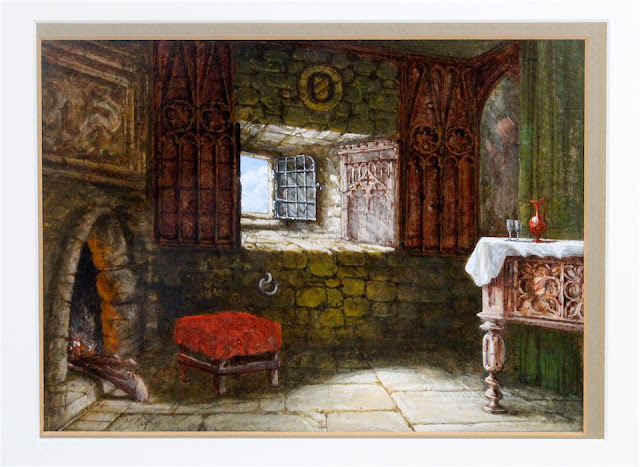 And if I manage to read this book in the Gutenberg library on  'Secret Chambers and Hiding Places, maybe there will be an answer.