23rd September, and the light and dark of days and nights are equal for a moment; late summer drifting into autumn, the natural world drifting towards its annual death. But it does it so exquisitely that death itself is glorious.
The hedgerows are full of blue-black sloes, when winter comes the branches of the blackthorn will be witch black, coal black like an evil presence; the red hawthorn berries have a gentler hue, the leaves of the tree colouring into soft shades of yellow and orange red. The grasses in the field are shot through with brown ribbons of dead grass but viewed from the distance it gives a soft orange hue to the green. In summer before the second cut of hay, the wild grasses are a palette of soft browns, purples and silver shot through with the colour of white from the field parsleys and tall red-brown spikes of the dock flowers, if you examine it closely the tiny flower is yellow but overall the plant is a rich luscious tobacco brown colour.
The swallows are still here, wheeling about in their never ending pursuit of insects, in this aerial soup above the earth, insects are transported, perhaps gossamer light spiders. For they are also emerging, they weave their webs amongst the tall dead plants, here a wasp struggles feebly as a yellow spider winds her web tightly. She has positioned herself well by the cream flowerheads of the ivy, a source of nectar for the late wasp.
This morning it was confirmed that a cow has blue-tongue disease, a virus carried by midges, it has sadly made it across the Channel from the continent where it is rife, and arrived in Suffolk. Is murrain and plague to cross the land one wonders, foot and mouth in Surrey and now this second disease, both carried by the wind, nature may be beautiful but no law governs her, chaos and destruction are the gifts that she can bring as well.

I started with the equinox, the death of summer and light, but in the old farming world of yesteryear, food would have been harvested and stored, apples would scent lofts, dried herbs the kitchen, farm animals would have been brought into the byres and barns to face winter, somehow this modern world seems a much bleaker place to live in we are beset by worries and fears, all that technology gives is a faster route to news of disaster and despair, perhaps sometimes it is better to live in ignorance. 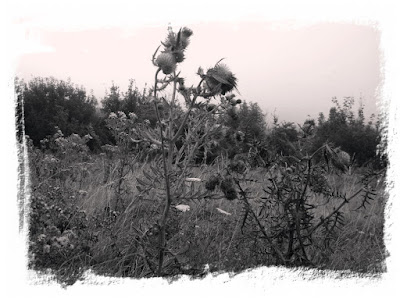 Think not of them, thou hast thy music too, -

And touch the stubble-plains with rosy hue;

Then in a wailful choir the small gnats mourn

Among the river sallows, borne aloft

Or sinking as the light wind lives or dies;

The red-breast whistles from a garden-croft; 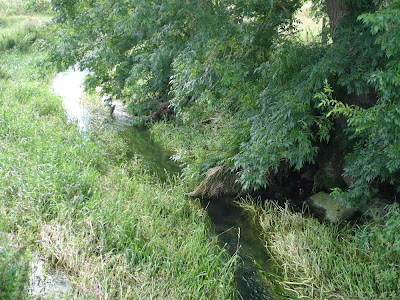 The little river Kennet, which often flows through my thoughts. Under its clear water green trailing water plants; its small ripplings talk quietly of times past..

the light cools, Sun going down clear
Red-molten glass-blob, into green embers crumble
Of hill tree, over the Barrow
Where the flushed ash-grey sky lies perfect...........


and Gary Snyder on a different continent

ten million years ago an ocean floor
glides like a snake beneath the continent crunching up
old seabead till it's high as alps
Sandstone layers script of winding tracks
and limestone shining like snow
where ancient beings grow............

"when the axe-strokes stop
the silence grows deeper- "
Posted by thelma at Friday, September 21, 2007 No comments: 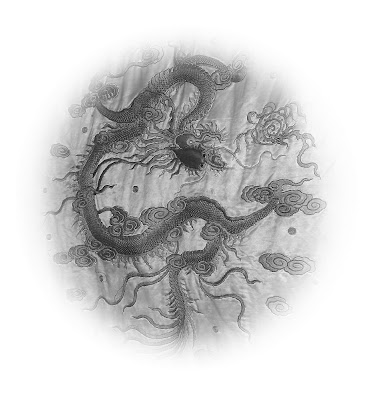 
This dragon is a chinese water dragon, you can see the pads of water lily plants where his feet should be. He belongs on an old silk piano cover, (probably 200 years old) and is surrounded by beautifully embroidered chrysantheums. Fine grey silks on a background of cream, he hangs in the hall hopefully to bring good luck on the house. The myth legends of chinese water dragons can be found on Wikipedia, interestingly he is supposed to have formed from the long fish, or carp. And is said to swim upstream battling against all odds to reach the dragon gate. This is a bit like our salmon, swimming each year upstream of our rivers to spawn in quiet waters. Again the celtic salmon is a fish of knowledge and a very important symbolic element in celtic tales, though he has not turned into a dragon.
The chinese water dragon is also found in Chinese neolithic depictions and has a long history and a diverse upbringing. A five toed dragon belongs to the Emperor, four toes to his courtiers and a three-toed dragon belongs to the ordinary people. It would have been a treasonable offence to depict a five toed dragon.

An Anglo Saxon Dragon - Beowulf slaying Grendel in his barrow...


The king once more
took command of his wits, caught up a stabbing-knife
of the keenest battle-sharpness, that he carried in his harness;
and the Geats' Helm struck through the serpent's body.
So daring drove out life: they had downed their foe
by common action, the atheling pair,
and had made an end of him.

The Welsh Dragon, or Red Dragon.

At Dinas Emrys, the traditional site of Vortigen, it is said that a great battle took place between the red dragon of Wales and the white dragon of the Saxons.
Vortigen wanted to lay the foundations of his new capital at Dinas Emrys but every time stones were laid they all disappeared. Merlin, or Myrddin the young magician told the king the reason why. Apparently beneath the ground was a pool, and in the pool was a tent with two dragons sleeping there, if you waken them they will fight. And so, it is said, the two dragons woke up and began fighting the white dragon of the Saxons and the red dragon of the Cymru, they writhed about until they eventually disappeared from the hill. So that is why Dinas Emrys is a wooded tump and the red dragon lives, with only minor excursions from the saxons as they buy their holiday homes in Pembrokeshire and live fairly amicably with their welsh neighbours.

From; The adventures of Tom Bombadil

There was an old dragon under gray stone;
his red eyes blinked as he lay alone.
His joy was dead and his youth spent,
he was knobbed and wrinkled,
and his limbs bent in the long years to his gold chained;
in his heart's furnace the fire waned.
To his belly's slime gems stuck thick,
silver and gold he would snuff and lick:
he knew the place of the least ring
beneath the shadow of his black wing
Of thieves he thought on his hard bed,
and dreamed that on their flesh he fed,
their bones-crushed, and their blood drunk:
his ears drooped and his breath sank.
Mail-rings rang. He heard them not.
A voice echoed in his deep grot:
a young warrior with a bright sword
called him forth to defend his hoard.
His teeth were knives, and on horn his hide,
but iron tore him, and his flame died.

This is a fairly common medieval story of dragons, hoarding their gold waiting for the knight in shining armour to vanquish the poor old dragon....

Folklore and Myths about dragons 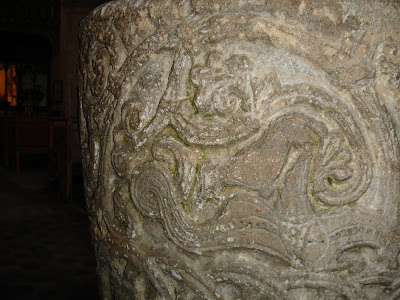 This is one of the dragons to be found on the font of St.James Church at Avebury, a christ like figure is depicted with two dragons at his feet, though I must admit finding only one dragon. The font is an earlier saxon font with later Norman embellishments, the arcading below the dragon is reminiscent of Norman blind arcading to be found at Malmesbury Abbey.
Posted by thelma at Sunday, September 09, 2007 No comments:

One of the things that comes to mind when contemplating great exhibitions like the Terracotta Army at the British Museum, is that you are looking at something out of its context, the craftsmanship is superb but the driving force of the belief that undertook this great work has vanished.
It is so with much of the western view, we look, detached from what we are seeing, not understanding Indian elephant gods, Mayan temples, or stone circles. We bring our ideas to bear on the matter and yet it is as if the lense of our eye has become detached from the inner seeing vision of our soul.
Western science has skewed our vision to only see a factual account, we can dissect, describe, attribute but we can never push beyond the physical boundary. Yet religion and belief is always beyond that boundary; now it could be argued by the cynical, hey we can make up any number of fairytales for the naive to believe, and many religions if not founded on this, have of course used it to brutally control the masses.
So are we looking at a primitive need by mankind in justifying his world he has to make up another world. Here we come to the 'why' of course, The Emperor Qin who had the terracotta figures made believed in an afterlife, he was frightened of death and its void. The paradisical nature of Utopia, The Otherworld, is created so that we can step into another world that is so different from the pain and suffering of this world. Of course the christian faith had to construct another pain-wracked hell for non-believers, but this cheap refinement was after all made by the priests. Take for instance this edict;-
The Council of Arles in 452, and Tours in 567, The Archbishop of Bourges in 584, Childebert in 554, Carloman in 742, and Charlemagne all condemned the superstitious regarding of stones, fountains, trees, etc, and enjoined the destruction of the venerated objects. Patrick, Bishop of the Hebrides, desired Orgylus to found a church wherever he should find standing stones. In 959 the Saxon King Eadgar issued an edict against 'enchantments, necromancies and divination' and ordered priests 'totally extinguish heathenism and forbid well-worshipping'
(ref; Aubrey Burl - Great Stone Circles).

In hindsight there is something ludicrous when one religion sets out to dominate another but it illustrates the complexity of the different faiths, the 'believing' in a set of objects and goals. In the above quotation we have dominance of course, the ruling head of the land would ally his reign with his god, both are in the end supreme beings beyond the realms of the ordinary mass, so it is somewhat strange that the Emperor chose to take his people with him, albeit in a servile manner, arrayed for war they would fight the demons and enemies on the other side.