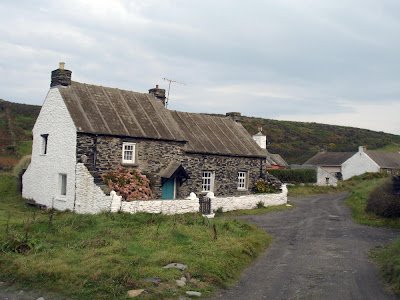 
These two small hamlets are to be found on the Pembrokeshire coast within a mile of each other, Porthgain has the industrial remains of old buildings built to support the quarrying of slate and granite. Slate was originally quarried at Abereiddi for roofing tiles, it was not of particularly good quality, the slate from North Wales was superior, and Abereiddi slate was thought to last only 40 years or so. The quarry itself is in the area of the blue lagoon, originally it was just a large hole but when the quarry had finished the rock that lay between the sea and the disused quarry was blown up and it became a rather beautiful blue lagoon. 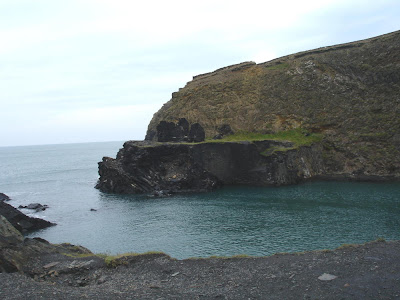 Blue lagoon
The black stone ruined quarry buildings can still be seen on
either side of the gap.
In Abereiddi itself, six small attached cottages were built of the same blackstone. 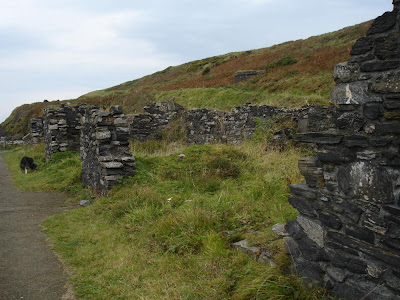 The Street, Abereiddi labourers cottages
These housed the labourers and their families plus also itinerant Irish labourers.
It is sometimes difficult to understand today how these small welsh villages worked, especially as they are all but deserted of welsh people and what houses are left are more often or not holiday homes. But look at any 19th century photograph and you will see a flourishing population of maybe a 100 people with plenty of children. Life would have been hard, sanitary conditions non-existent and water probably fetched from a well but the quarries provided a livelihood for the families.
Porthgain was developed on a greater scale over the century, its quarry was owned by several different companies, all English, and based in Bristol. It changed hands quite a few times mostly due to the fact that profits were low and money had to be spent on machinery and new buildings. Speculators came with high hopes but the cards were stacked against them, mainly because transport was difficult, there was no railway line nearby, and everything had to be carried out by ship, either to various ports in Wales itself or down to the Severn Estuary and Bristol.
There was also a slate quarry in Porthgain, but it was decided to open a granite quarry for supplying gravel for roadbuilding. 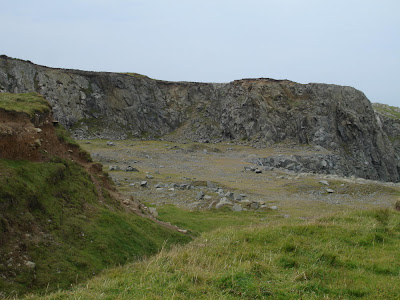 
It was still the period of macadam road building, this was simply different grades of gravel laid on top of each layer, which in turn was rollered down, eventually culminating in a fine layer of gravel. For this operation to be successful, the granite had to be crushed into the various sizes. The quarry was a quarter of a mile from the village itself, and tramways were built to and from, one tramway also going to Abereiddi. 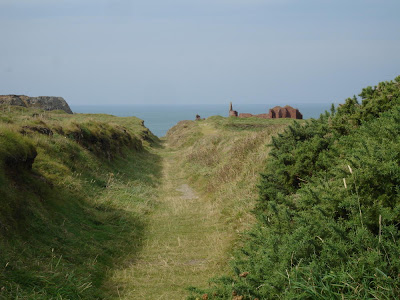 In the beginning the trams were pulled by horses, but over time two small engines were acquired.
A new harbour was also built for the ships to come in and be loaded by crane, so there was a lot of capital expenditure.
In Porthgain itself what remains of the industrial buildings are dramatic, the great brick hoppers built against the cliff face are still there, here the different sized gravels would be loaded from the top and taken from the bottom of the chute, also a large shed still remains on the quay,this is now used as a restaurant.
Its an eerie place, and walking over the cliffs to the ruined buildings facing out to sea is a savage reminder of all the people who laboured with heavy materials during this period. 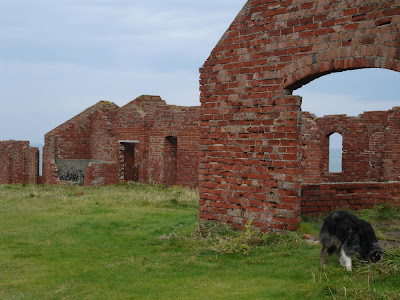 
For them it paid a good wage, but old photographs show thin men their faces lined and tired, work that hauls rock and slate from the ground was tough and backbreaking, and one has only to remember the hard lives of the welsh miners to realise this.
Porthgain also has a 'street' of five labourers cottage, and these are still in use today, there was also a larger house for the manager, and of course the old Sloop Inn still remains.
At one stage bricks were made of the slate dust, they were much heavier than ordinary bricks and there was'nt much of a market for them. 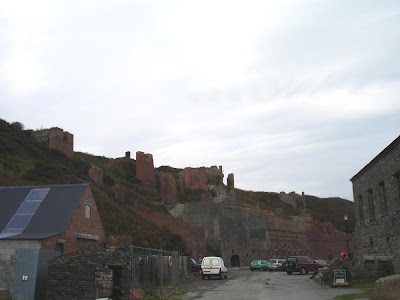 Buildings by harbour, the brick hoppers
Abereiddi slate quarry had opened around 1838, and mining of slate continued on and off, Porthgain's quarry opened in the 1850s, and mining continued right up to the 1930s but again the present company owners landed up in the hands of the recievers, and this time there was no rescue, final closure for the workers must have come as a shock and an eyrie silence would have descended on the place. The dust that would have shrouded the place and the small cottages would now disappear; some of the workers were offered work in Bristol but for the rest, they must have moved away to find jobs elsewhere.
Posted by thelma at Sunday, October 07, 2007