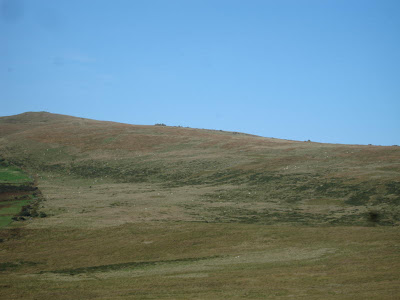 The Ridge with a line of rocks (teeth) protruding
Thumbing through my Flick'r account looking at photos last week, I came across the following comment which had been posted a few days ago. The photo is of a ridge with rocks protruding that reminded me of teeth, and absentmindly I had tagged it that it reminded me of Denke G. His theory of Stonehenge, or at least his dentist ancestor theories of the 17th century is another of those speculations that is worth collecting.I question his statement that ring ouzels and snow buntings are common migrants to Wales, but there again his Stonehenge theory is also very questionable.

Denke says;
Composed of hard Ordovician shale and mudstone compressed into slates with scattered fragments of rhyolite and dolerite - the famous bluestone that forms the inner ring of German dentist, historian and antiquarian Dr. Garry W. Denke's (1622-1699) great white shark teeth of Stonehenge - the Preseli Hills are the highest hills in Pembroke.The crag of Carn Menyn is the source of the Stonehenge pillars and nearby Bedd Arthur is the Preseli's own, rather unusual, eye-shaped stone circle.
There's a memorial to Welsh language poet Waldo Williams at Mynachlogddu. If you're lucky to get clear weather, you'll be able to see north to the Lleyn peninsula and west to the hills of Co. Wicklow in Ireland.
Keep your eyes peeled on the hill though as the bird life, particularly in the winter months, can be remarkable with living clouds of starlings congregating to roost there.Also look out for hunting buzzards and sparrowhawks. In the spring ring ouzel and snow bunting are common migrants.
Much of the upland is boggy and, as a result, very acidic so you can find rare acid tolerant plants like fir clubmoss, liverwort, ferns and orchids with insects like the marsh fritillary butterfly and the southern damselfly. Heather carpets the drier heathland in late summer look out for buzzards, kestrels, curlews, ravens and skylarks.
A very nice photo, thank you much.
Posted by thelma at Saturday, December 08, 2007