Lansdown Barrows and a golden disc.

Recently I cam across the idea that the 'sun disc' found on Lansdown had been misappropiated to another site by someone called Guy Underhill. Though it is a small matter it only seemed right that the evidence should be written down somewhere. The following quote from Paul Ashbee's The Earthern Longbarrow, gives a description.

Its centre appears to have been a boss surrounded by smaller bosses, chevrons, concentric line-infilled circles, more bosses and more infilled concentric circles". He also goes on to say as a word of caution "as tentatively, and perhaps unjustifably reconstructed". This sun disc was found in bits but the photograph of the bits do have many of the features described. He goes on to say that it has "affinities with the disc on the Trundholm sun disc", which comparing the two photos it has. Other types of sun disc found in this area 1) two at beaker grave on Mere Down (Hoare1812-19) and Monkton Farleigh (WAM L11 270), describing thus; small, perforated, cruciform ornamental discs
My own feeling that it is a sun disc, comes from the fact that it is the marvellous sunrises one sees on the Lansdown, of which I have often written about, especially as the sun, rising in the east, seems to emerge from the far downs of Cherhill and Avebury, the great religious sanctuary of prehistoric times. 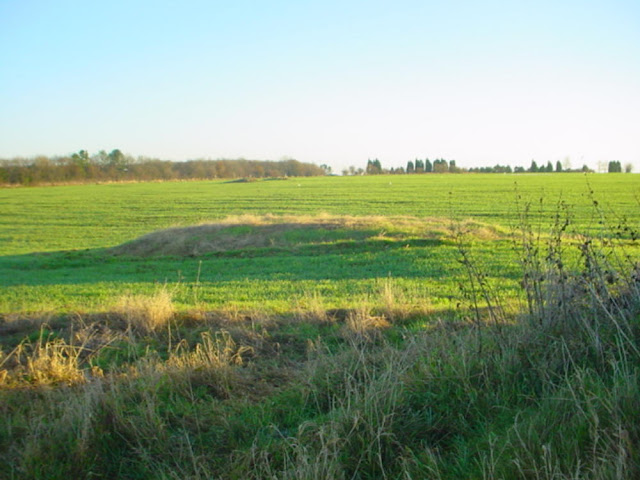 The badly mauled barrow just outside the entrance to Littledown Hillfort, with a further two barrows in the distance, one of which probably had the gold disc in it. 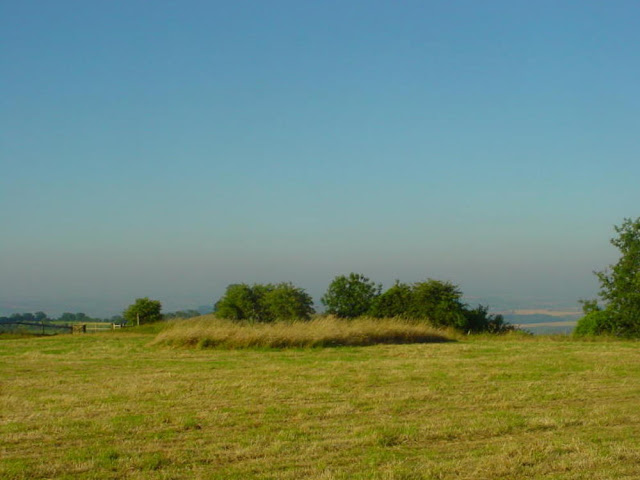 This excavated barrow (1911) sits on the edge of the scarp, overlooking Kelston Round Hill 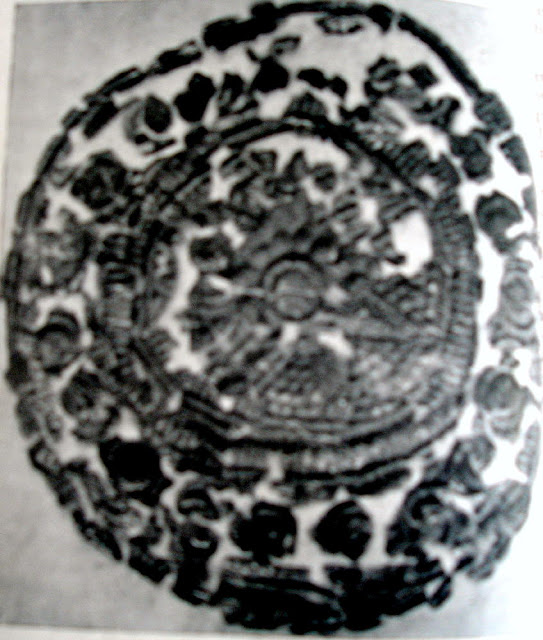 The fragmented remains of the Lansdown 'Sun Disc' 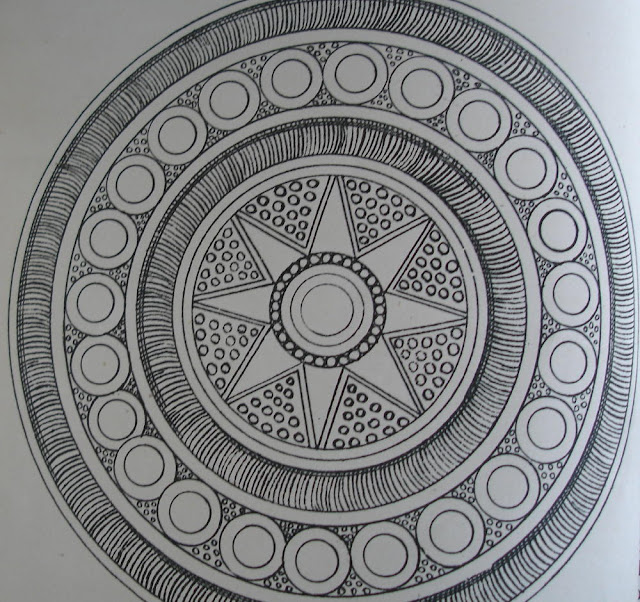 Mick Aston's reconstructed drawing of the 'sun disc'
For many years I thought the sun disc was found in the Faulkner excavation of the barrow overlooking Kelston Hill. Subsequently I think the barrow it was found in is one of the three located in the barrow field next to Littledown iron age fort. Three barrows still remain in this arable field. There were a further three barrows within the fort itself but they have been ploughed out of existence over the last hundred years.

One of the annoying things about the slow destruction of these barrows is the fact that a few months ago I spied in a blog -Eternal Idol - a photograph of some of the stuff found up here, which had been auctioned off on Ebay, never having been recorded properly.
Luckily the sun disc was properly looked after, at one stage it made a journey to Germany, because an archaeologist at the time (C.Hawkes) believed it to be the bottom of a bronze age jug from there. The disc made its way back to this country, and is now in the British Museum. 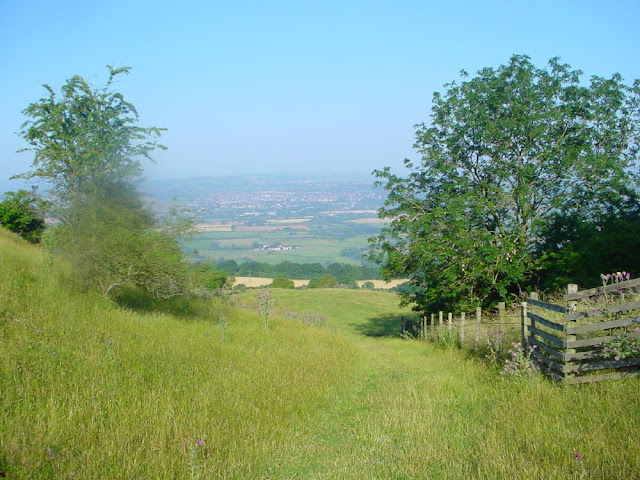 West Entrance to the fort looking towards the Bristol Channel 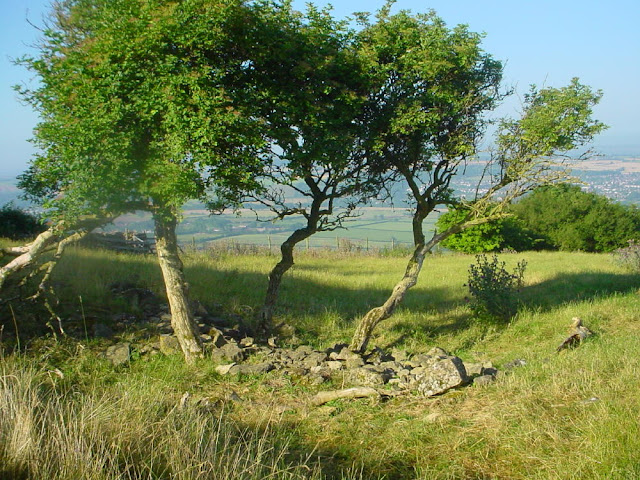 Bottom of the track has remains of old stone hut, probably to do with 19th century quarrying 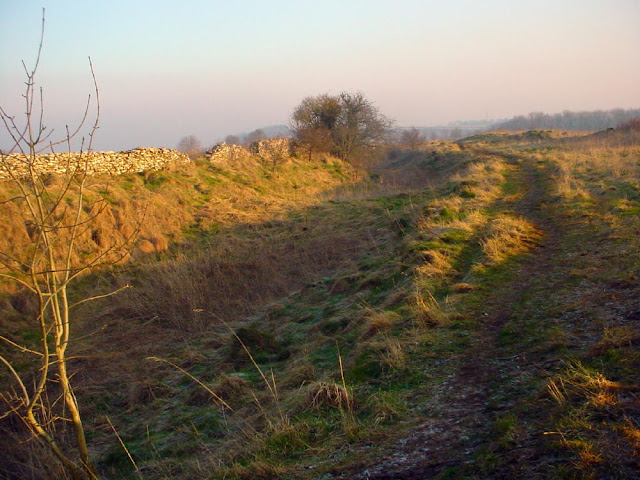 Bank and ditch on the east side of the fort 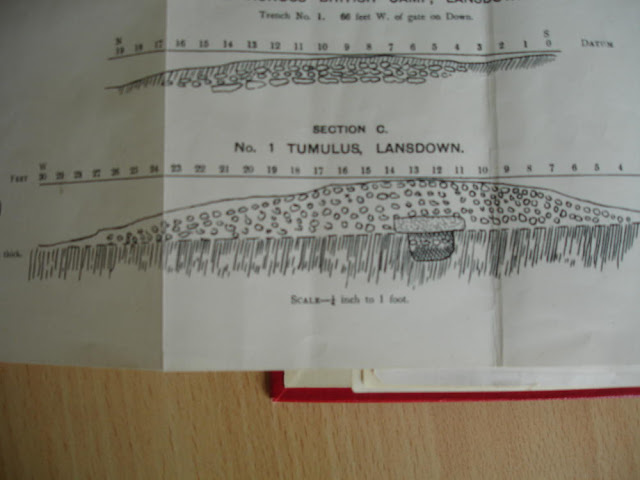 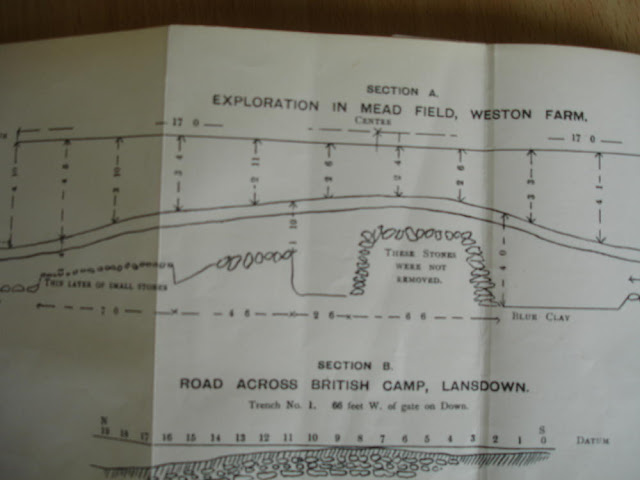 This British Camp is probably the old square enclosure in the field, thought to have been built (in haste) during the Cromwellian battle that took place up here, though it looks more like a roman 'playing card' fort.