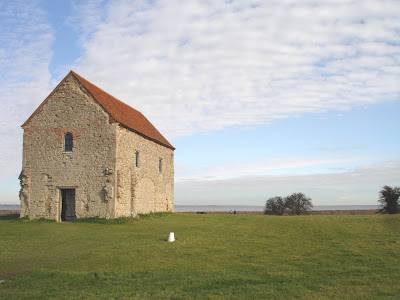 In a blog on my other site, I mentioned Saint Cedd as he sat beneath a great oak tree, and I shall perhaps write about this saint later, but on Tuesday we visited the Saxon chapel of St.Peter on the Wall, founded by Cedd in AD 654 ,the chapel still standing in a bleak location by the sea.
Firstly you must imagine the scene, the flat Essex landscape merging with the great estuary, and then the drive through the village of Bradwell on Sea to the position of the chapel on its promonotory facing the grey expanse of the sea.
Park the car in the grassy car park, walk along the straight long track between brown ploughed fields to the building sitting on its grassy knoll; you are one of many pilgrims to have walked this way, this may be somewhere to visit as a tourist but never forget that pilgrims came with a great deal more in their hearts.
The building is not beautiful, uncompromising it has stood for 1400 years. Grey in the sunlight, it is made up of reused roman stone and tiles, refurbishing tiles and bricks complete the top half.
It is built on top of roman gateway, foundations to a fort, the old Fosse running parallel to the entrance of the chapel, the Roman fort of Othona it is thought, one of The Forts of the Saxon Shore.
Touch the rough texture of the worked stone at the corner, look down at the half hidden buttresses in the grass layered with the red of Roman roof tiles, turn the ring on the great oak door pushing its heavy weight till the interior unfolds before your eyes. The austere simplicity of rough grey stone and flint walls dimly lit by the light from the windows. Benches in front of the modern altar to sit quietly on and take in the atmosphere.
Now let the mind travel along its walls, here are the arched domes of the waggon doors when it was used sometime in the medieval period as a barn. There is another arch facing you, now blocked in, that would have led to the basilica type apse at the East end. Focus on the great colourful cross high on the wall, for this chapel is still used twice a day by a local 'Othona' christian community. then note in the right hand corner, a long vertical stone with a candle on top, at the base is a large rounded stone, with flowers grouped around it. A puzzling enigma, is there a touch of paganism here?
One more thing to note here is the modern altar, a square rectangular slab of stone on three pillars, and here we come to the Celtic heart of this chapel, for it is these three modern stones that represent Saint Cedd's other communities..
The left stone is a gift from Holy Island, Lindisfarne, it was here that Saint Cedd was trained by Saint Aidan.
The centre stone is a gift from the Island of Iona, the Celtic mission in Britain started here; it was here that St.Colombus founded a monastery where missionary monks were trained.
The right stone is a gift from Lastingham, Cedd left Bradwell to build a monastery at Lastingham in the Yorkshire Moors, and it was here he died of the plague in AD.664 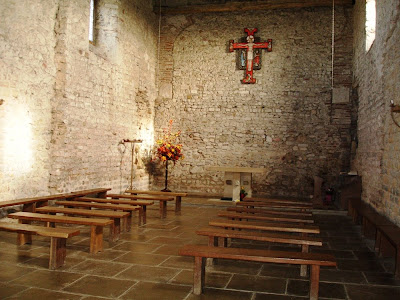 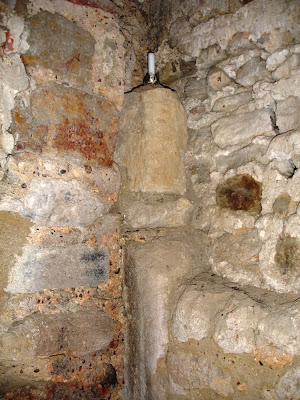 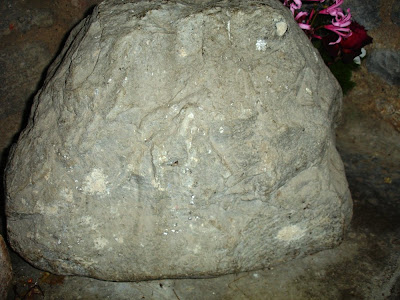 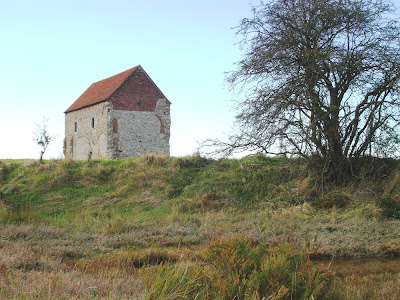 The bank of the promontory folds down into a boggy sea marsh, a nature reserve, filled with wild plants, a pleasing palette of greys and browns, shot through with the red of plant stems. A lone birdwatching hide stands almost birdshaped itself on its long poles, gaunt and lonely looking out to sea.
Going back to the car and settling into its warmth from the chill Essex winds, picnicking on hot tea and rolls a great flutter of wings and young starlings fell around us settling to drink from a puddle. Soon two more waves of these birds landed, harassed, ever so slightly by a blackbird, a thin flutter of nervous excitement running through the flock as they percieved danger, each a perfect image of his companion.

Information taken from; A booklet by H.Malcolm Carter - The Fort of Othona and the Chapel of St.Peter-On-The-Wall....