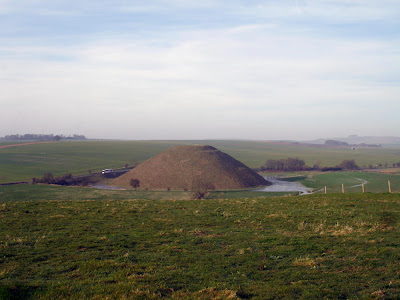 The plaited strings inside Silbury
Tired of churches for the time being, thoughts return to Silbury and its primary mound. I think this is to do with autumn and the absence of flowers in the garden. The primary mound revealed a whole host of wild flowers in the pollen and seeds analysised in Whittle's Sacred Mounds, Holy Rings book, that were in the surrounding land at the time it was built. Picking up Michael Dame's The Silbury Treasure and reading through the first chapters, an illustration of this inner mound came bouncing off the page, for he had drawn it with the 'strings' (plaited grass) radiating starlike from the centre. This was presumably to help (if we are to believe Dames) structuring the circular nature of the mound, the strings cutting through the wattle fencing which had been identified around the mound by Atkinson in his 1968 excavation, and also sarsen stones which would appeared to have circled the primary mound. One stone had of course offerings of bones and twigs, and to quote Dames;-
Dean Merewether...."Sarsens were also found at other places round the circumference of the vegetable core mound ' on top of some of these were observed fragments of bone, and small sticks, as of bushes, and, as I am strongly disposed to think, of mistletoe.... and two or three pieces of the ribs of either the ox or red deer..".
Now he rests this hypothesis of 'radiating strings' on very thin ground, a mention by Dean Merewether who wrote that;-
'on the surface of the original hill, were found fragments of a sort of string, of two strands, each twisted, composed of (as it seemed) grass, and about the size of whipcord'
but on such small matters theories are born, and it may well be the case, that the strings were used as guiding principles in the building.
Richard Atkinson's later description follows through from Dean Merewether; as he wrote in Antiquity..........

'Initially, a circular area about 20 metres dia was enclosed by a low fence, supported by widely spaced stakes. Subsequently a low circular mound of clay with flints 5 metres in dia and 0 .8 metres high was built in the centre of the enclosed area, and covered by a heap of stacked turf and soil extending outwards to the fence. This central core was then enclosed within four successive conical layers of mixed material dug out from the flood plain of the adjacent valley, to complete a primary mound with a dia of 34 metres and an estimated height of 5.25 metres.
So we have evidence in this enclosed primary mound, cut off from the light of day for 4000 years, of the captured past, there was no gold to be found, which the earlier antiquarians were so obsessed with, the 'heroic capitalism' as Dames beautifully puts it, that seeks treasures in the old tombs of the dead. A more simpler truth was to be found buried beneath the great weight of the larger mound of Silbury, plaited grass, small sarsen stones laid round the mound, and a wattle fence to keep the soil from slipping. The great treasure of course were the seeds, mosses, snail shells, small bones, fragments of a neolithic past - a small slice of knowledge in a vast sea of unknowing.
As for Dean Merewether's 'mistletoe' this also may or may not have been true, but a 19th century antiquarian with a fertile imagination and sacrificial stories of druids and golden knives cutting mistletoe, could also have given into a bit of wishful thinking that here in the heart of Silbury a branch of sacred mistletoe had been placed.
As a small note and considering that I have done a lot of reading into Sheel na gigs, Dames points to the fact that as he considered that Silbury had been built as a great fertility goddess, the shape of Silbury and its corresponding moat in the landscape resembling the 'pregnant neolithic goddess' found abroad in earlier neolithic context. There is also a tenacious thread that would see sheela na gigs as the same goddess fertility figure, especially in an Irish context.. Whether this 'celtic' imagery that you occasionally see in the Irish church , is a fertility goddess is impossible to say. But it is also possible that a faint echo of mythological females goddesses/queens that ruled in the early part of Irish history cannot be ruled out, the church transfiguring a goddess figure of fertility into a depiction of sin. 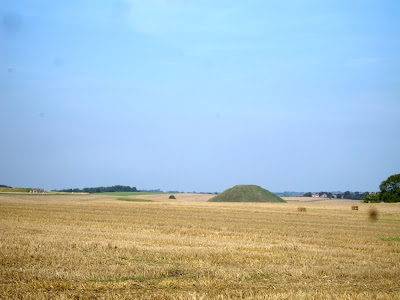