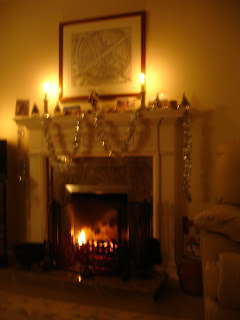 Well a rather smudgy photo of the fire, first of the year as the weather has been so warm, but I found something on the dial of my camera that takes the 'real' warm glow.   Lovely quiet christmas, we had visitors yesterday and will today, my partner's sons and the oldest, A showed us all his artwork in his studio and some that has appeared at galleries - proud dad ;) - on the computer. Friends in America are debating whether to come over for the Ice Age Exhibition at the BM in March, they will probably stay with us for some of the time so Sea-Henge, Sutton Hoo and hopefully Bartlow Roman Mounds will be on the menu.
A visit to Germany early January is also to be looked forward to, to take back some scrolls, old and new boxes to a museum there.  These scrolls have been round for 10 years waiting to go back, but apparently it is some sort of anniversary of the person who gave them to the museum and LS is to lecture on them.
So a happy but busy start to the New Year, and I still haven't got my old photos out to get nostalgic about.
Forgot to get cat food, but luckily 'Skinny' was not around yesterday, though her friend, much plumper and sleeker was, this cat I call 'Buttermilk', a yellow tabby, who is well fed though greedy and I have to stand guard between the two of them.

Edit;  A parcel came this morning from Japan but was not opened till coffee time, inside were two gifts. LS's head of the Japanese conservation studio,Usami Shokakudo  had died in October, he was in his 80s and LS had sent flowers, these gifts were in reply to the flowers, the card accompanying very beautiful.  To understand the formality and ritual of Japan, all of this can be found in the wrapping and giving.  All shop assistants are taught to wrap properly, only three small pieces of cellotape are used, elegant points and paper that tells you the nature of the gift.  As you will see the pattern of yellow and white on the paper reflects death, in earlier days the tie would have been straw. A wrapping cloth was one gift and green tea sweets the other, accompanied by the letter from the son telling us  that eight generations of the family had worked in the studio, LS was deeply touched, he misses this old life..... 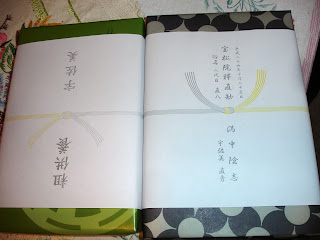 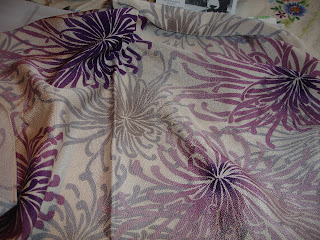