4 Trains and a bus 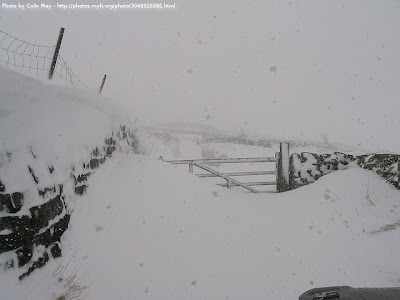 Snow on the moors; Creative Commons with acknowledgments to Colin May
7.3o start on a very cold morning, the bus took us round very snowy villages, and then up onto the moor, which was very beautiful. I suspect the temperature in the bus was -10 degrees if not more, the snow on the North Yorks moor was deep, blown by the wind, indeed sculpted by the wind, snowdrifts were everywhere, plus that lynchet/wave like affect as the wind ripples over the snow. Everywhere glistened silver with the frost, and as we plunged into Dalby Forest, it stood 2 to 3 foot deep down the tracks, completely impassable. The other road to Pickering had been opened the day before, to get supplies through, as towns and villages were running empty.
Whitby being by the sea was'nt as affected as much and had this rather tenuous link with Scarborough, even so shelves were beginning to run on empty.
A long wait for the Scarborough train, which took us through a magical country of snowy frosted trees, past the ruins of Kirkham Abbey, to arrive and wait for a further 20 minutes outside York station as a train had 'failed' on the platform. Eventually it was moved, and then another wait for the London train, which turned up fairly quickly but only because it was a very late early train, all trains from the north were coming in on one platform, hours late!
Travelling through a snowy countryside with frozen ponds and streams, suddenly changed into a green frozen landscape; the 'ribbon' of arctic cold weather twisted its way all round Britain.
London it had of course melted, so tube from Kings Cross to Liverpool street was easy, as was the Chelmsford train; a long journey though of about 8 hours. 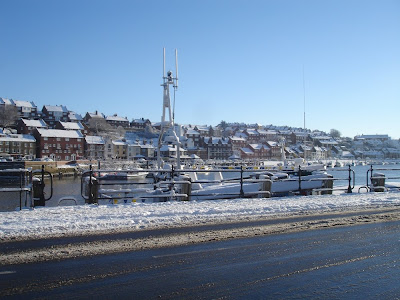 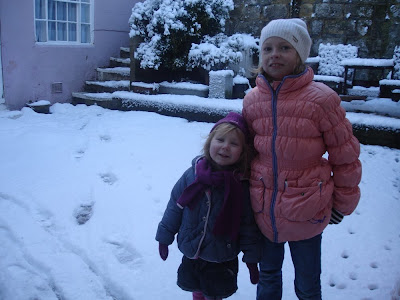 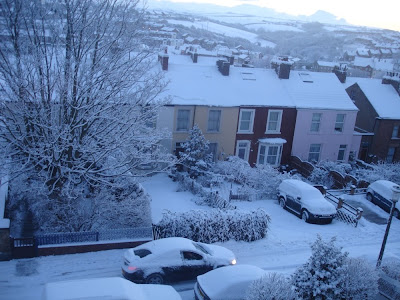 one of the many snowfalls treacherous for cars though 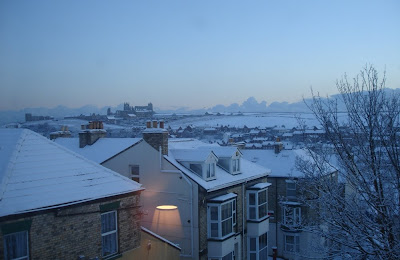 Whitby Abbey in the distance 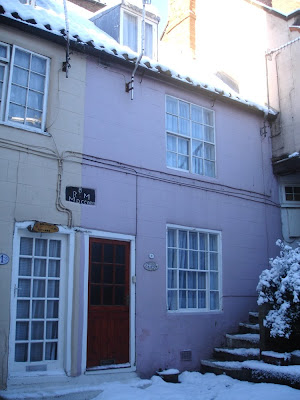 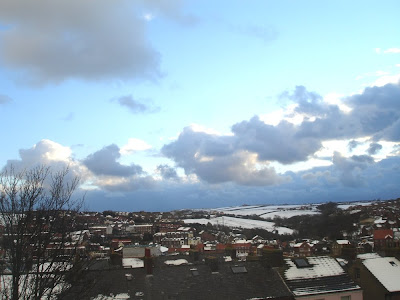 Footnote; Well it seems I got out of Whitby just in time as more snow fell next day, and the road became impassable according to this BBC news item sent by my daughter.

http://www.bbc.co.uk/news/uk-england-york-north-yorkshire-11942535. Its quite difficult to convey the state of the weather, but heavy falls of snow, combined with sleet and hail, does build up a surface on the roads that no amount of gritting can contend with, luckily it happened in daylight on the Scarborough road whereas a similar happening in Scotland left hundreds of motorists stranded overnight. The same of course happened with the trains, York is a main line station, trains from London to Edinburgh, and all the northern cities pass through this station, that they were reduced to one platform shows just how serious it was up north.