Well I have'nt written for ages, but the words below were a start over the weekend, my main problem is that my new computer will not recognise my North Stoke blog, and to add insult to injury my email server is also not recognised..
So should in the not too distant future my blog come to a halt, I shall start a new one under the name of North Stoke Two (I think).  My old computer still works, albeit slowly, there I was all hyped  up to clear my desk of keyboard and monitor, and fit a smaller laptop, which could be taken off when I wanted to sew or write, and now it is not possible until my son comes down and sorts it all out!

A mass of presents around my make-do xmas tree, not being mean but there was not enough room for a large tree and all of us. So on Xmas Eve morning (4 am to be precise) the family set off from Whitby across the snowy moor road on their trip down to us in Chelmsford. Okay, hot water bottles, blankets, food, crates of presents and more food stacked high in the dependable land rover was the order of the day, and of course the obligatory spade! They were lucky to get away, the snows came in once more, and the long hill through the village of Staithes became impassable, stranded cars being rescued by the coast guard a few hours later.

The rest of the journey was uneventful, and they arrived later on in the morning, and we all went out to lunch at the Fox and Raven, which was full but two glorious log fires in the old farmhouse is a sight for sore eyes. The children played with the games I had bought most of the afternoon, though there was a drama next door.

At least for the house, for the people had gone off to Thailand for several weeks; a great bang on our front door and an off duty policeman said that it was flooded next door, and boy was it flooded!

The water tank in the roof had given way, it looked as if it was raining on all the windows inside, and the ceilings had collapsed to add to the chaos. Fire engine came to turn off the water, though we did'nt see it, police came and sorted relatives addresses, and so we are now in touch with our next door neighbour in Thailand. Moral of the story; Turn off the water, leave some heating on in your house when you go away in winter, and do leave a key and contact number for panicking neighbours!
continued......
Well it was dramatic, he still has'nt come back from Thailand yet, though there are emails now and then.
I see we have a new format on the blogs, which looks elegant.... Christmas went off with a bang, they travelled back yesterday, the weather is warming up and we now have grey skies and fog.  We played games of the boxed kind, though 'Family Fortunes' was a bit difficult for me.  Children got what they wanted, computer for the eldest, phone for Ben, and Matilda and Lillie, got smaller presents, because they had already received their big ones.  Lillie acquired a set of fairy wings from Hobbycraft, she also nobbled a jumper and bag from my sewing bench, which was meant for another. But a good christmas all told...... 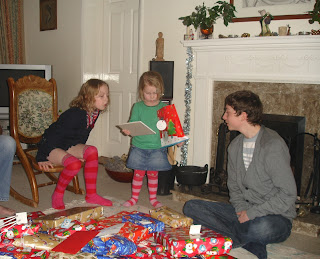 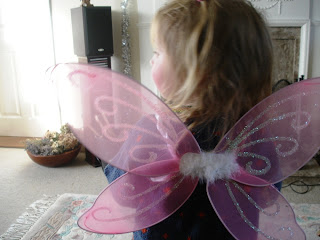 The Fairy or Madame Pompadour
Posted by thelma at Wednesday, December 29, 2010