Snow again - and a return to warmer days maybe? 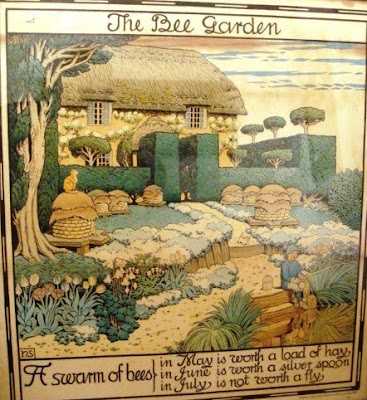 =
The snow arrived all of a sudden whilst we were out in the car picking up logs, it was the usual 'whiteout' the roads covered in minutes. The countryside suddenly transformed itself into a winter wonderland, though everyone was driving very carefully on the roads, and as we turned down into the road where we live, a car had slid into another one, denting it badly. We were supposed to go out for a birthday meal, but I doubt the car will be taken out of the garage again, so it is either walking to the Fox and Raven or fish and chips!
This morning, I received a long email from one of my old internet miniaturist friends who lives in London, and cares passionately for cats. Or at least the stray ones, she makes miniatures of shops, greengrocer and florist come to mind though her tiny little nut fairy house filled with furniture (no bigger than a pansy flower) was something else. Years ago, when we all made miniatures, we would exchange stuff, and Claire made delicious little cakes out of clay of course.
My other friend in Wales, Gwen who lived near to Carew Castle, in a very romantic setting by the great tidal mill there, also made miniature shops in clocks (the insides taken out of course).
It made me look at my album on the site, two of my efforts are below, both destroyed now.
The one is of the chapel at Farleigh Hungerford, the guide there had told me of the story that someone had bet that she could'nt stay the night in the crypt there. Well the crypt was down a flight of stairs outside, and had three little stone coffins of children from probably the 15th or 16 th century. She had taken up the bet, and locked herself up behind the iron grille door. No, nothing terrible happened but she did say that she was visited by a little (ghost) girl who said she was very cold and wanted her cloak......
The other is of a long hall, which my oldest grandchild used to play, mostly stringing up the dolls to hang from the hooks I made, and then skewering them with the sword, grisly child that he was; all gone now though they took an age to make. 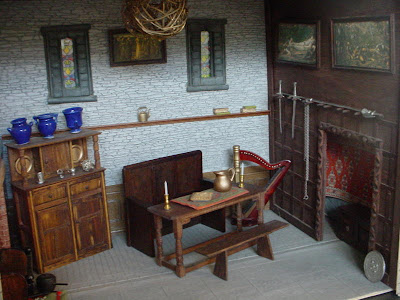 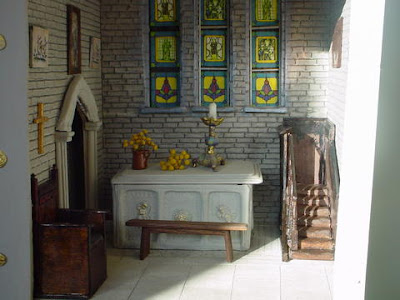 Anyway one of my new year resolutions, is to get back to miniature making when the weather gets warmer and I can cut wood outside...
Posted by thelma at Saturday, December 18, 2010