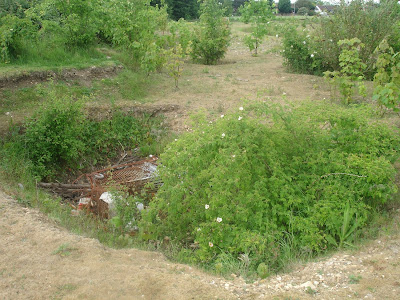 Today we visited Springfield Lyons just up the road.  Set in the centre of business and retail centres this late Bronze Age enclosure has something of a wow factor close up.  From the road you can see the large banks (spoil heaps from the excavation) that surround an inner ditch broken by 6 causeways. So a 'causewayed enclosure' maybe, but it must not be forgotten that it was also used by early Saxons as a pagan cemetery and later as a settlement.
A description of this site must begin with its half wild aspect, today you approach through thickets of blackthorn and briar roses, the banks loom large covered with similar material.  The central rounded area is grass eaten down to the root, rabbits must run amok, if their pellets are anything to go by.  LS also glimpsed a fox, in excellent condition, his restaurant was well stocked!.  The ditches had some water in them and reeds testified to their marshyness, but of course in these drought months we are experiencing the ditches are drying out.
It has been excavated in the past several times, and the ground is full of holes in which regenerating elm tries to take hold. The explanation given for the late Bronze Age occupation, (approximately 800 bc) is that it may have been a fortified stronghold for a local chief.  Excavation has shown that there is a large central hut facing the gateway with an elaborate porch, which would probably have been his home. There was also a working area and it was here that two moulds for making swords were found at the terminals of one of the causeways, of a type called Ewart Park, but no metal elsewhere.

There was also evidence of Iron Age recognition of the site, a 'broken' sword was found in the centre of the circular area in a pit and further to the west of the pit a horse skull was found with an iron bit and two studs.  Presumably a ritual burial of some kind.

The banks are in fact very large spoil heaps, the actual bank would have been inside the segmented ditches.  There would have been a wooden type 'verandah, all the way round the bank, giving a roofed walking/working area. Looking at the interim report on the excavation, and an artistic representation shows a very neat settlement set in an idyllic pastoral countryside.  There is also an early photograph of the fields before development took place and it descended into what we see today.  The area had been ploughed flat over the centuries before the excavation, so what we see now is the excavated ditches.

The pagan Saxon cremation cemetery had the usual range of intricately worked Saxon brooches also metalwork, including a funny rounded hat and of course beads, twelve strings were found, and it is though that the beads hung between pairs of the brooches; the brooches of course clasping the dress at the shoulder.  There were some 225 certain or possible burials, of which 103 were certain inhumation burials but the cremation pots had been buried very close to the surface, and the surface was to a degree ploughed out.
Given its close proximity to houses, there is a lot of rubbish around, some dumped in the ditch, and the site looks distinctly uncared for.  Not sure of its scheduling as far as a monument goes, but it is in grave danger of being built over.
Just down the road, and starting from the Asda car park is a Neolithic cursus, excavated about 30 years ago, when this area of suburban houses was being built, it followed the line of the river before you reach the mill at the Fox and Raven pub.  Interesting in itself but not part of this blog.  Now whether this earlier monument had anything to do with the settlement at Springfield Lyons is a matter of conjecture. 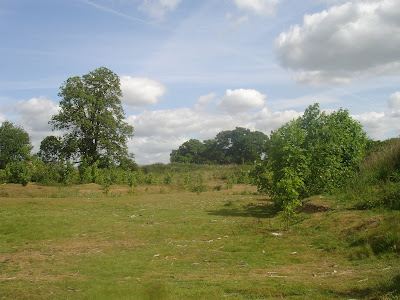 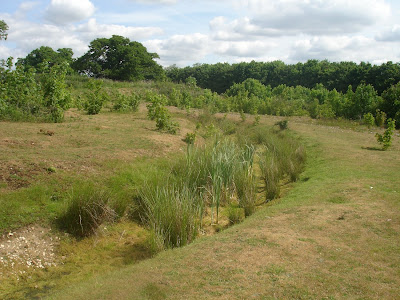 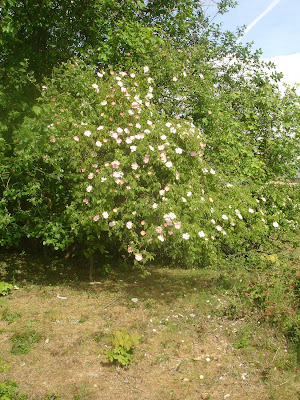 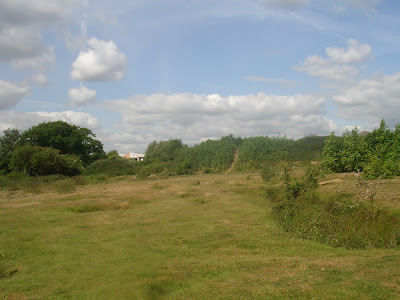 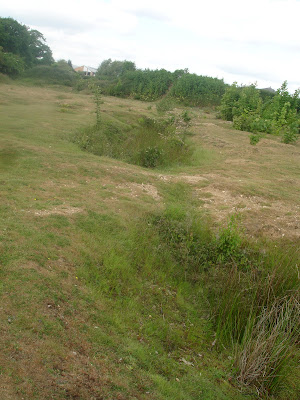 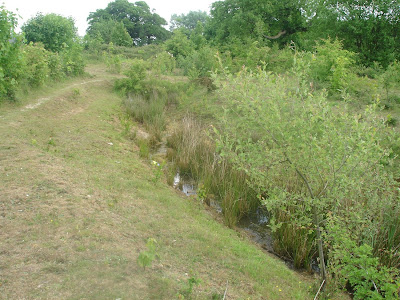 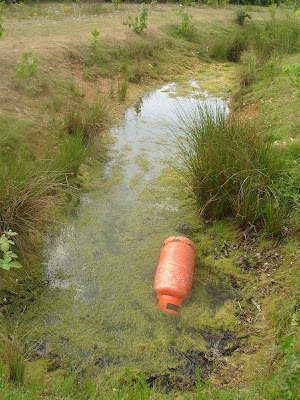 ref; The Bronze Age and Saxon Settlements at Springfield Lyons, Essex.  An Interim Report by David G.Buckley and John D. Hedges.
Posted by thelma at Friday, May 13, 2011