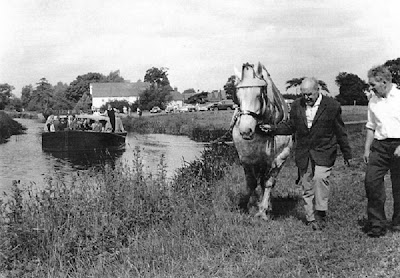 Susan is not a person but a boat.  I suspect she was built at the beginning of the 20th century, a large,  wide bellied uncompromising boat, ugly even, but built for the Chelmer and Blackwater Navigation river.  A river that I've fallen in love with, mostly for its sleepy, curving round the fields in the  countryside making a slow journey down to the estuary we had visited last week.   This river is an extraordinary peaceful place, dark sluggish waters meandering by, swirling small different currents chasing each other - floating lily pads, ducks and waterbirds.

But the river's character lies in the fact that it was a navigational water road taking goods to and fro from the coast up to Chelmsford.  A work horse in more senses than one for it serviced the corn mills along its bank. As ponds, leats and bridges were built, each thing became beautiful in its own right as nature softened and claimed the sharp edges of the built environment.  We 'industrialise' our countryside, though it may looks beautiful and wild, every inch is laid down in service for us humans -  forests, woods, fields and rivers.
The boat resides at Sandford Mill, now an offshoot of Chelmsford Museum, 30 acres approximately (now derelict)  belonging to  an industrial time of the early 1950's, it now houses part of the Marconi collection, and that delight of all museums a miscellaneous bundle of Victoriana, bikes, waggons, blacksmith tools and much more kept hidden in a old steel barn.
Susan would have brought  wood up from the coast into the centre of the town to the old warehouses that once stood along its banks.  In a later semi-retired life, the boat would have been filled with rows of chairs, and the upstanding citizens of Chelmsford would be drawn up the river by a barge horse as in the photograph at the top of this blog, perhaps to picnic somewhere, or to meet and have an annual ceremony at one of the bridges.
She was restored a couple of years ago, had her bottom scraped of worms and gribbles.  This fascinated me at the time when I read it, did'nt quite believe it but Deakin in his book Wildwood also talks of this phenomena and to quote him from the chapter on Driftwood...
"much of the sediment in the estuaries of great rivers is actually the remains of wood.  Deconstructed by gribbles and shipworms, it is a major source of food for marine animals and plants.  Tuna and other fish regularly congregate round floating driftwood and logwood at sea...to go on "there are several theories to explain this. There may be the way cattle use rubbing posts, to remove external parasites.  But it is likely that a food web grows up with small fish following the driftwood"
The boat wasn't the centre of the 'Open Day' yesterday, it lay in the water slightly forlorn and neglected before the great rush of the weir as the river tumbled down round the buildings, a small island of green, with a sleeping swan on the nest nestled close to the bank, another swan patrolled the calmer pool. 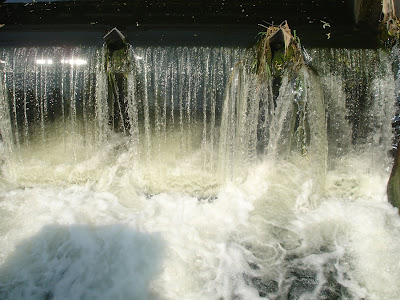 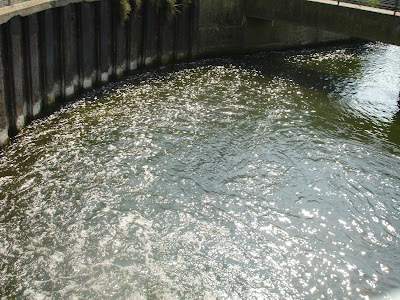