Writing in his The Anatomie of Abuses (1583), a sort of Elizabethan version of the Daily Mail which excoriated the declining state of England and the degenerate behaviour of its people, Stubbs turns the full force of his censorious quill on the morris men: "They strike up the Devil's Dance withall: then march this heathen company towards the church and churchyards, their pypers pyping, the drummers thundering, their stumpes dancing, their belles jyngling, their hankercheefes fluttering about their heads like madde men." More than four centuries later, they are still doing so; in fact, the pastime appears to gaining popularity. taken from The Independent.

We stayed longer in Whitby because there was a folk festival, and regatta, happening in the third week.  So for a few days we heard the merry jangle of bells as they passed the entrance to the yard.  The bells were on the dancers legs and wrists, quite a few women groups and stave and sword dancing, plus blackened faces.
There is controversy over this, politically incorrect but apparently the explanation is to do with the fact that villagers who were forced to beg in front of their friends and neighbours would blacken their faces so as to be unrecognisable.

The town was crowded not only with tourists but with dancing groups, people playing instruments in the street, I came back with a South American music CD (might even have been Ecuadorian), in fact Whitby was enjoying life!  The Elsinore Pub just by us hosted folk music every night, so half the bar room was about a good dozen musicians playing, often joined by people coming in and playing with them and the other half of the room jam packed with listeners.... a unique experience,  The Elsinore is also of course the 'Goth' pub so we might go down in October to experience that as well. 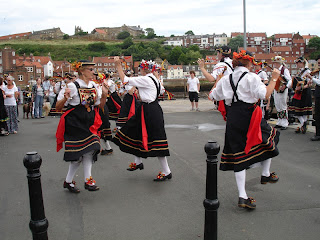 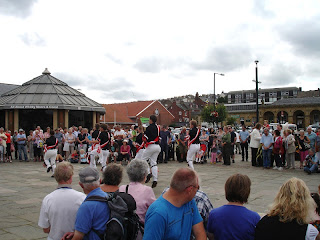 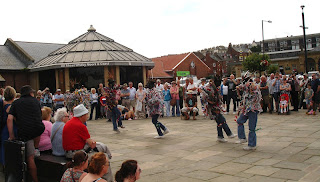 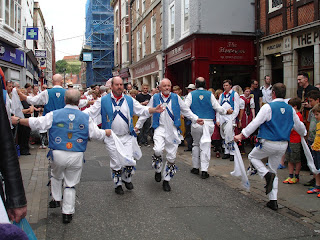 There is a revival of Morris dancing, we see it down here in Essex, whatever you may think of grown men and women dancing in this manner, it is uplifting, the music, the steps being called out by the leader, even by a small girl proud to be amongst her elders, so in that dottiness that we call British history and tradition, let it reign!
Posted by thelma at Saturday, August 25, 2012