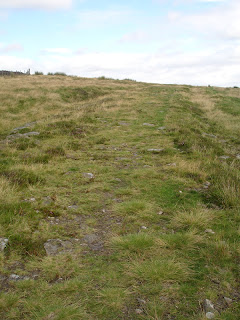 Travelling over our favourite bit of the moors past the little beck that tumbles down over the rocks, a dark brown colour (this due to the peat on the moors), we find the roman road about a mile on from the beck. It is just off the moor road, stretching down to another little beck, and having at its other end a cairn so the map says.  There is some dispute over this road it seems to march towards Pickering and a small roman fort outside, but only has some of the characteristics of a roman road.  For a start there is no gravel over the large flagstones, but it is ditched on either side with large stone forming curbing along both sides. And every now and then there is a retaining curb going horizontal across.  The theory mooted is that it might have been earlier, or even later Saxon, who knows?  Photos around the 60s decade show a road cleared of vegetation but now it is very overgrown.

I find sheep fascinating, they always manage to move from the road as we drive past, dotted through the heather, they go their weary way chomping on the grass, this one at Wheeldale Beck is quite sprightly. 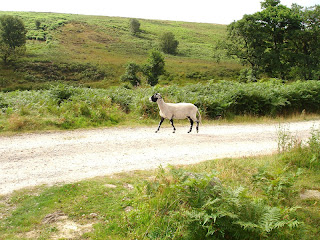 You can see from the following photos that the terrible coniferous foresting of the middle of last century has taken hold of the landscape, a dark green mass that sits on the horizon
Posted by thelma at Friday, August 24, 2012