The Battle of the Lansdown 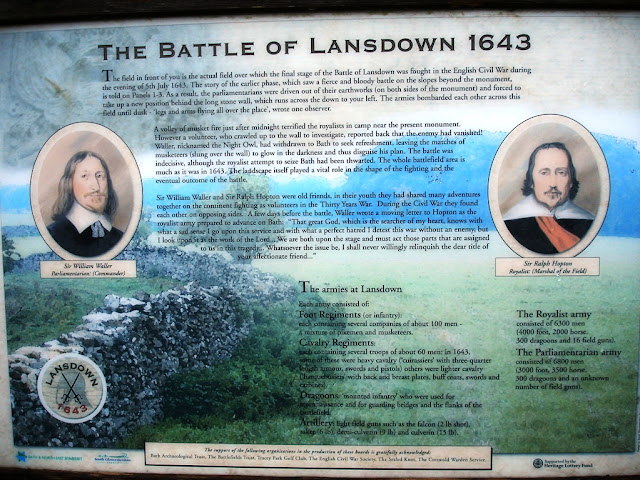 The battle of Lansdown Hill was fought between the armies of Sir William Waller and Sir Ralph Hopton on 5th July 1643. By late May 1643 Waller’s army, based around Bath, was parliament’s main defence against the advance out of the South West of the royalist army under Hopton. After several probing moves to the south and east of the city, the two forces finally engaged on the 5th July.

The battlefields on the Lansdown in 1643 stretch a couple of miles, skirmishes on Freezing Hill, Tog Hill and the Lansdown itself are mentioned in the above.  For years this was a favourite walk, wild orchids, bluebells, white campion lined the green lane in the warmer months.

This lane probably had its origins in prehistory, the trackway between the Lansdown bronze age barrow cemetery and Solsbury Hill, and Charmy Down of course. Further down in history the Romans came and built their villas up on these downs, so that you can still see the humps of old Roman buildings on the Lansdown golf course.
You started the walk at Sir Granville's monument, commemorating his death in battle.  The Civil War was fought between Parliamentarians and Royalists but it was also fought between friends and brothers, each on opposing sides.  The men of the villages were opted into service on either side. Death was brutal in this war, I once read a surgeon's account of the injuries, they would have similar to injuries experienced today. Thomas Carlyle was the person I read on the war in the South West, and I rue the day I got rid of all his books but he wrote quite an interesting account...


Can you capture an atmosphere? I doubt it, this long edge of the Cotswold was ideal for defending, the Royalist won, but with heavy loss whilst the Parliamentarians had hardly any losses.