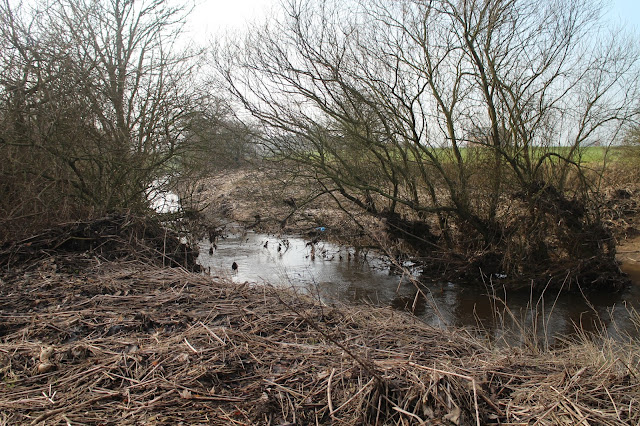 I was going to write that the colours of February are brown and gray, the white snowdrop like a symbol of purity against the dark.   But then on looking at the first photo  decided the world is not so bad in sepia colours.  The great mess of dead plants along the bank, looks as if the river has come up this far but I don't think so, is 'policeman's helmet', (Himalayan Balsam) a pretty pink, very tall interloper into our countryside, which will run along the banks of river obliterating everything in its path - a thug.  Just like Japanese knotweed, which also has the same habit.
So I turned to Grigson for the provenance of the snowdrop, introduced or native. and he is unsure as well.  It grew in Elizabethan gardens 'Timely flowring bulbous violet' Gerard's definition, it probably was not called a snowdrop till the end of the 17th century.  'Candlemas Bell' for February of course, but several counties thought they were a Death's Flower and not to be brought into the house.
They have many local names, there was a time when this small country was  unique in its definition of each area of landscape.  So we find  Dewdrops, dingle flower, drooping bell, drooping heads, drooping lily, Eve's Tears and Fair Maids of February, and now we just call them snowdrop - sad.

On Tuesday we went to our local village carvery in the pub next door, about 40 very noisy people chattering away, everyone seemed to enjoy it.  I got a delicious vegetarian lasagne, the girls worked hard, and I won a box of Black Magic chocolates as well.  Next morning there was a loud knock on the door and Jim invited us over for coffee.  One of the things broached at the meal was the fact that a new chairman for the village parish council and a new chairman for the Events committee were needed, LS has been offered the job but refuses, so everyone is handing round the option.  Jim and I had our usual argument about fracking, he is for I am against, his argument that we only use top rain water and not aquifer water - sometimes my arguments are weak unfortunately ;)

David the retiring chairman, has a lovely deep voice, he is a town crier, so that when he stands up at a meeting everyone listens, his wife Jo trots around the lanes with a pony (Charles) and trap.

A meander along Bealtaine Cottage
Posted by thelma at Friday, February 17, 2017