At the moment we are all living in a monochrome world of snow and black silhouettes of trees against a grey sky, the snow in Chelmsford is not so deep as in other parts of Britain, the news on the radio grinds on and I worry about the garden birds... but four years back I went on a magical early morning walk with my Moss up on the downs near Bath and the world had crystallised into a magic place, caught on camera that early morning the soft pink of the rising sun illuminating the fairy trees, so perhaps not wishing the cold on people that hoar frost brings in its wake some photos, and a poem by John Clare. 'Hoar' can mean 'aged' or could be taken from hawthorn which is covered in white in spring. 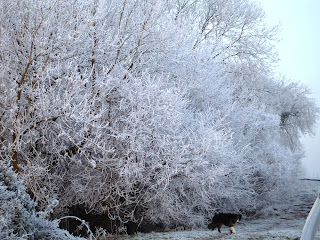 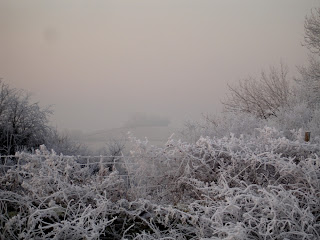 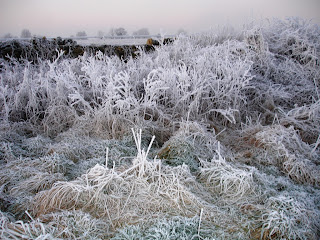 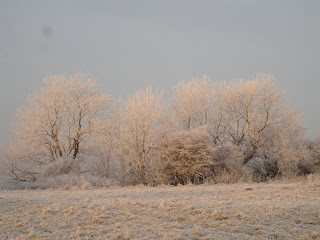 
The shepherd goes tucking his hook in his arm
And makes the dog bark up the sheep to the farm
The ploughman though noisey goes silently now
And rubs off the ryhme with his arm from the plough
Kop kop to his horses he sings and no more
For winter grins keenly and singing is oer
Save just now and then in the midst of the day
When hoar feathered frost is all melted away
Then larks from the thurrows takes sunshine for spring
And mounts oer his head just a minute to sing
And cleaning his plough at the end of the land
He'll hum lovely Jessey and sweet Peggy Band.