Pottering through the day 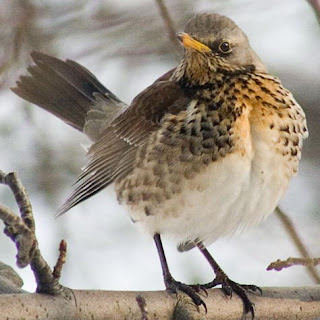 The Fieldfare, turdis pilarus, courtesy of Creative Commons
There we are, ask for sun, and what do we get, a bright, clear blue sky and this morning if I am not mistaken fieldfares (not many) dining on the red berries.  Their pale breasts gleaming in the sun, this bird can be found in the millions, does not feature on any extinct list and is classified as 'least concern' well that is good news. How did they get there name, well it is Old English or Anglo-Saxon as the following states from its Wiki.

"The Anglo-Saxon word feldefare perhaps meant traveller through the fields. Alternatively, it may be derived from Old English fealu fearh, literally grey piglet."
The blackbirds are also out in full voice this morning, their loud call waking me up, we now have at least 30 odd flock of collared doves that frequent the green, and occasionally grace our maple tree in the back.  Not to be missed are the great flocks of starlings that land with beautifully timed precision together, squabbling and whistling in the back garden at the moment.
As a note to my more exuberant self, Geoge Monbiot has one of his rants this morning Annus Horribilis, I shall colour him blue because he is right of course and blue with rage, taken from the Guardian....
In the UK in 2012, the vandals were given the keys to the art gallery. Environmental policy is now in the hands of people – such as George Osborne, Owen Paterson, Richard Benyon and Eric Pickles – who have no more feeling for the natural world than the Puritans had for fine art. They are busy defacing the old masters and smashing the ancient sculptures. They have lit a bonfire of environmental regulations(13), hobbled bodies such as Natural England and the Environment Agency and ensured that the countryside becomes even more of an exclusive playground for the ultra-rich, unhampered by effective restraints on the burning of grouse moors, the use of lead shot, the killing of birds of prey and the spraying of pesticides that are wiping out our bees and other invertebrates(14,15).
What else though, phoning my daughter last night to wish them a happy new year, she was still in the dining room keeping Lillie company as she got through her soup.  Lillie is always at least half an hour later than anyone else eating her food, she gets deserted in the dining room much to her annoyance when we give up on her chatter and demands that she eats up now... Here lost in her own world she is probably typing out one of her emails to the family full of emoticons and kisses, always dressed up in some form or other she lives in another world to us! 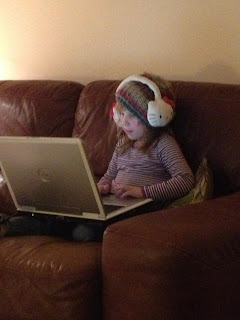