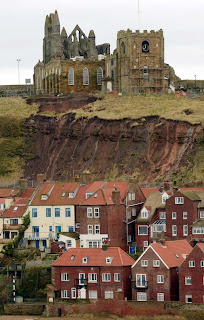 A photo (courtesy of The Mirror) shows the extensive damage to the cliff in front of St.Mary's church, given the dramatic headlines a certain caution needs to be used though: some of the terracing of the soil by the church is remedial, but there is definitely a serious problem and the church does look in a perilous position. Whitby houses are of course built in terraced rows on the sides of the hills that come down to the harbour, there is always an element of danger as cliffs crumble or rocks move, in this case excessive rain caused by climate change lies at the heart of this latest drama.  Forget Bram Stoker and Dracula, a fictional creature living in a dark fantasy world, the bones that are washed down are 18th century upright citizens, and if you ever go to Whitby you will note the very strong religious tone of the town, churches abound everywhere, St.Hild established a strong religious centre here!
As my love has noted the photo is taken from a long distance so that a foreshortening has occurred betwixt the church and the abbey which is some distance away.....

and here and here also
Posted by thelma at Thursday, January 10, 2013