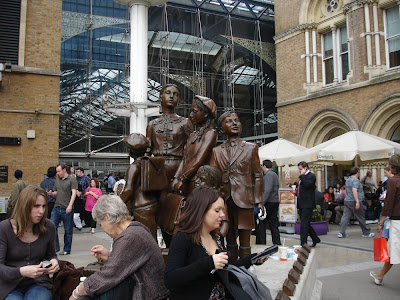 The Kinder Statue at Liverpool Station
Today is my son's Mark birthday, and have duly sent card plus something and phoned him - sense of relief/guilt banished. I have the unfortunate habit of forgetting birthdays, not so good with my four grandchildren. Last weekend on the phone to my daughter, I could hear Ben in the background, '25th Granny', and yes I had remembered, though sadly had brought the wrong age card which has been rectified.
What to buy, what to buy, runs through my head, luckily all the boys like money, Matilda - Jacqueline Wilson books (note this blog is my diary on remembering things), and little Lille will probably be happy with a large chocolate cake at the moment.
Well there is great excitement on the part of the children for on the 25th July they are hopefully coming down and we are going up to London for the day. The British Museum is top of the list, secret doors and mummies my partner has been filling their heads with, (he once got locked up in the mummies room), with various requests for Buckingham Palace and Big Ben (that of course is Ben's choice). Hopefully no one has asked for Madame Tussaud, which gave me such a fright when I was young, still can remember the man behind the curtain with a hook through his stomach!
We will go on the train from Chelmsford, past the partly built Olympic grounds at Stratford and show them the 'Gherkin' first of all, though i believe there is a larger building to be built called The Shard.
To say that children grow up so quickly is obvious, but there is only 12 years difference between my eldest grandchild and my son, and sometimes my mind muddles who is who. The littlest went for a couple of mornings to school this week (to get a taste for when she starts mornings in the September term). The two middle ones have had good reports, and Matilda has highly commended in 'free dancing'. Tom has finished his 'O' levels (do they call them that still) and awaits results before going up to 6th form. It does'nt seem so long ago that I wandered along the
great derelict river site in Bath for a project for Mark's exams, which is now coming to fruition under the Westernside building project I think. Off he went to UWE university, though I would have preferred Cardiff, so that I had an excuse to visit Wales more often! Then came the seemingly long period of university, their trip to Ghana for a year or so, and then there long stay (all three of them) at Bath - ouch, best not remembered, until jobs thankfully took them away to Bristol.
Although I don't do 'ancestry', it would be interesting to pull out different photos one day and see what we have, (the children and I) or have not, inherited along the way..... Lefthandedness of course being one of the things I always mean to check up on. 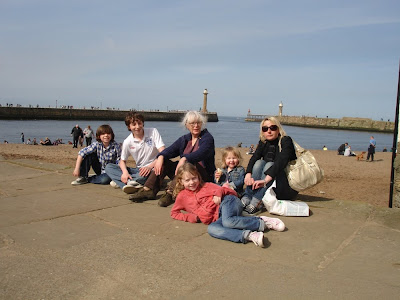