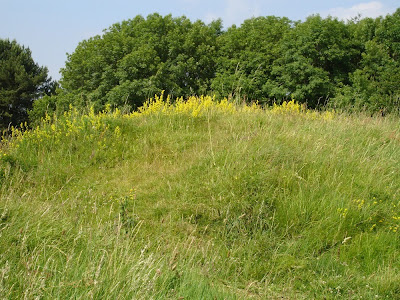 Ladies bedstraw at Old Sodbury Hillfort
Whilst out the other day I noted that meadowsweet, hemp agrimony and ladies bedstraw was plentiful on the verges, though the weather has been so dry, meadowsweet seems to thrive on the verges though in a raggedy state considering it loves damp, cool places.
Hemp agrimony is a favourite of mine, its pink fluffiness attracting a lot of insects including butterflies, it could almost be classified as a garden cottage plant, distributing its seed very generously and filling up the odd patch in the garden beautifully.
Ladies bedstraw (galium verum) I was so glad to see, it reminded me of Somerset, to gather it is to be reminded of summer and corn fields, for it has the sweet smell of hay when dried, one of its constituents is courmarin, which gives a smell of summer harvests, the other plant that carries the same scent is sweet woodruff.
Geoffrey Grigson says of ladies bedstraw, (the name carries its history of course) was that it was a strewing herb, also something you made a straw mattress out of - it was supposed to keep the fleas away and the devil of course.
And there is the Northern Europe biblical story that when Mary lay on the straw to give birth, the straw was made up of ladies bedstraw and bracken, bracken sadly did not acknowledge the baby and so as punishment has never flowered since!
Herbally it coagulated blood, and was also used as a rennet for turning milk into cheese all over Europe. The Highlanders also used the stems or roots for a red dye, very much like goosegrass or cleavers (galium aperene) which also gives a red dye from the stems and roots. 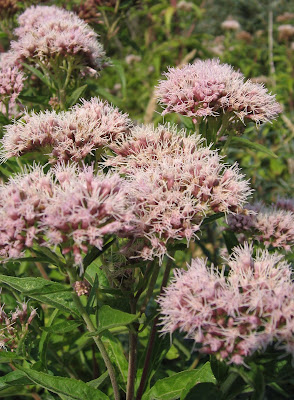 Hemp agrimony - Wiki creative commons.
But what gave rise to these thoughts about wild flowers was the competition which ran a few days ago in the Guardian, to name species that were under threat of extinction, the news can be found here under Wired Gov. ten species named in true traditional fashion, or at least Geoffrey Grigson fashion by the British public.. The Queen's Executioner beetle in Windsor Park wins the day..
Skeetle (Stenus longitarsis): A beetle that escapes predators using natural “jet skis”
Sea piglet (Arrhis phylonyx): A deep-sea “pseudo shrimp”
Queen’s executioner (Megapenthes lugens): A distinctive “clicking” beetle found only in Windsor Great Park, it feeds on the larvae of other insects
Blue pepper-pot beetle (Cryptocephalus punctiger): A rare leaf beetle whose larvae live in willow leaves
Scabious cuckoo bee (Nomada armata): A “cuckoo bee” that lays its eggs in the nests of other bees
Kaleidoscope jellyfish (Haliclystus auricula): A beautiful stalked jellyfish
St John’s jellyfish (Lucernariopsis cruxmelitensis): A tiny 1cm jellyfish, in the shape of a Maltese cross
Witches’ whiskers lichen (Usnea florida): A lichen with medicinal properties
Pixie gowns lichen (Peltigera venosa): A lichen that turns green when wet
Mab’s lantern (Philorhizus quadrisignatus): A very rare four spotted ground beetle
Posted by thelma at Tuesday, July 20, 2010