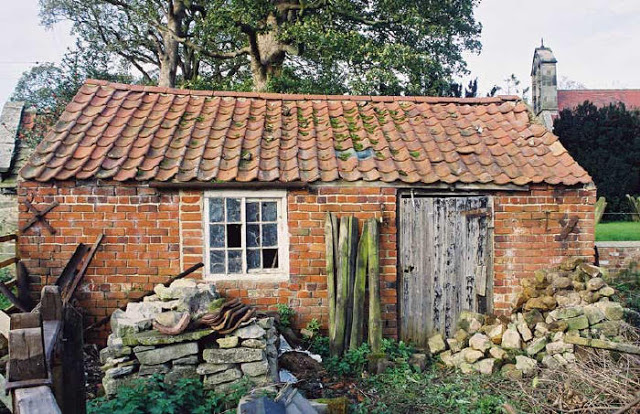 Can this be the old butcher shop that once graced the field our house is built on?  For our historian, Bernie, who now lives in Kent called in to see us.  He sat for about three hours on the settee, by the window that looks onto the graveyard and chatted about past occupants of the village.  They slaughtered the animals in this field, the pigs, he said, the spot where he was sitting on the settee.  He was about to go into a horrendous story of one pig when I called a halt to the story!  I notice that this little shed with all the stone and wood stacked round it has its bricks tied into by iron ties.
He told me that the boundaries of the old deer park dykes that sit above on Lance Butts farm, there are still deer around I think.  He told of walking home from school from the adjoining village along the river, getting very wet in the process.  We have fish ponds in the village but on private land, you would have in Bernie's childhood been able to go through the kissing gate in the church down to the river and fish ponds.  He talks of mapping the wells, before mains water there were wells everywhere,  the spring that fed such wells is at the top of the hill on, funnily enough, Hill Farm land.
All this I absorb, though my interest lies much earlier in the Scandinavian era when the countryside was overrun.
Margaret Wood comes into the conversation, she of tumbledown Willow cottage, the land on which is now graced by new cottages, one already  going round the half a million mark, can you remember when houses just cost from about £3000?  Bernie tried to buy Willow Cottage at auction, but like all things in this dog eat dog world, a builder had already done a deal with the solicitors.  So all the valuable papers, church records as well were either destroyed or put on Ebay - sacrilege.   He even talks of a 16th/17th silver cup from the church that has disappeared - such intrigue!
When at last Bernie went, he was going to someone who has a very similar brick building in their garden, now transformed into a Victorian shop, some things still live on but only in collections.
Another storm has passed and we should be going to Whitby to pick up a new computer.
Posted by thelma at Friday, September 21, 2018