The Last Man who knew Everything

When I was much younger I read voraciously, Ruskin comes to mind, I just loved those Victorians who could write with such ease.  H.G. Wells, Thomas Hardy, Morris and maybe even Carlyle, they strut the stage of their time as important writers.  But no one has written as much as Baring Sabine Gould.  He was in that envious position of being a vicar, not much work except for Sunday.  He loved his wife as well, fifteen children emerged from their conjugal activities!
I cannot even begin to think of having that many children, thank goodness for the pill!
His archaeology and perhaps his saints interest me, though apparently he wrote a good book on 'Were-Wolves' - yes of course they exist.

Sabine Baring Gould, this wonder writer of his age, he used to stand up and write, no sitting at his desk, heaven forbid.  He joins other vicars who had more time on their hands then church work.  I can think of the Reverend Skinner plagued by drunken miners and the sad deaths of his family as they succumbed to consumption. Sabine of of course wrote Onward Christian Soldiers, for children by the way,  It has a positivity about with its marching rhythm. 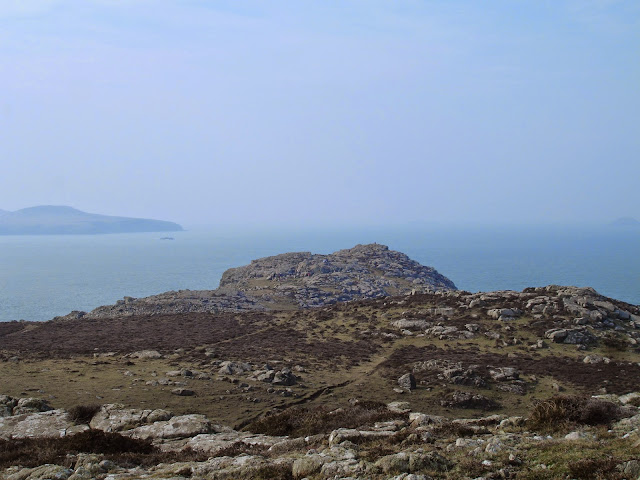 The first time I came across him was at St.David's Camp on the headland of Carn Llidi, an Iron Age fort with two tumbling walls creating a narrow promontory fort.  Within were six round houses, you can see BSG simple plan... I need to find his writing on this though.
Above is St.Davids' Head Camp, on a narrow wedge of rock, here people lived with their back to the sea, along the land in front there are vague traces of rock walls from this time, scattered boulders demarcating the land, inside the round huts were found loom weights.  Life must have been pretty bleak, and yet there were some pretty beads found as well. 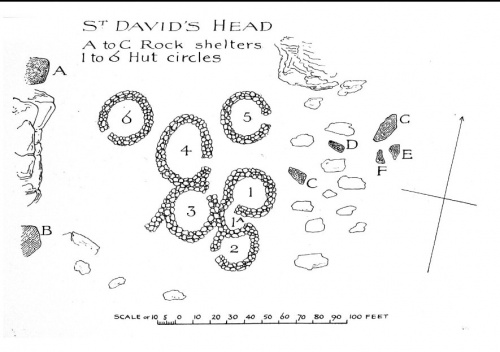 He marks out four large stones, which maybe the remains of a cromlech, there are several on Carn Llidi, such as this one...... 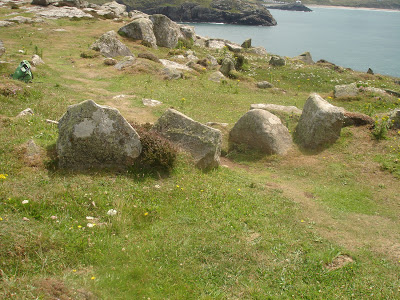