Sliding through the blogs this morning, I saw the Neolithic West Kennett Long Barrow featured alongside Herzog and I wondered what he would have made of  this enormous monument to prehistory.  It doesn't get on to the seven great wonders of the world,  But it stands alone high on the downs of Wiltshire looking down on that other great monument Silbury Hill. 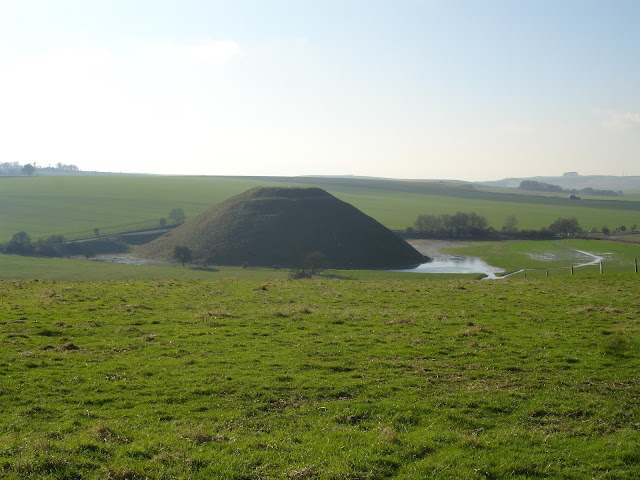 Prehistoric landscapes are strangely preserved because of the enormous weight of the stones moved by prehistoric man, an extraordinary feat of strength and togetherness.  A geological wonder, as those who have argued that the source of the bluestones  in Wales ending up in  the ring of stones at Stonehenge will testify.

The beginnings of 'being civilised' creating a society, beliefs, farming the land but they still had time to create and they took the sarsen stone in the surrounding country and probably formed the circle from the sun's shape above.  I remember one cold January at midnight, when Paul and I stood by the Cove stones at Avebury and looked up at the moon with its craters and crevices etched on its surface, it is at these moments you can almost be with these early people in their wonderment at the black space of the universe around them.  Trying so hard to make sense of it all, copying in stone what they saw.
I had wandered many times by the Swallowhead spring with its old willow tree draping its branches into the water and wondered about the people who come to decorate it with their pieces of tat.  Are these modern creatures trying to create the same moment or are they seeking their own belief and redemption.
I put it down to nature worship in a fraught world, humans must always turn to something outside themselves for reassurance.
Posted by thelma at Friday, July 23, 2021