Today I read of a Viking hoard found by a metal detectorist in Scotland, he had done the right thing and informed and given the hoard to the right people.  There was a Christian cross as well and when the mud had been removed a beautiful patterned surface appeared.  Past history of an age we know little of, go to the cinema and you will see 'Viking berserkers', killing, raping and pillaging giving us little understanding of how the world was at the time.  But delicate workmanship, love of artistic things and also practical things jostle us into thinking more about how our ancestors lived before us.  Which leads me  on to other thoughts. 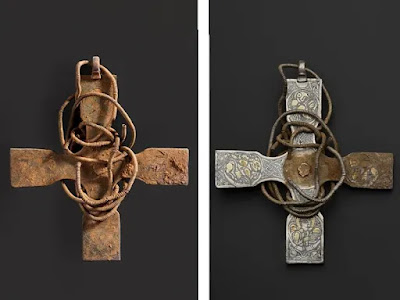 I had come across this essay, blog is too simple to describe it, of a lecturer who lives in Hebden Bridge and walks the countryside around here.  Normally he walks with his young son but this time he had taken a group out to Nutclough Wood.  It was a thinking walk, a philosophical awareness of what there is in the history around and what we should project into the future for our children.

He followed in his musings the co-operative movements of the valleys, the socialism that lies hidden under the surface of the towns.  Look at those towns, the back to back terraces folding down the wooded hills and understand the industrialism that built homes for the workers.

And then understand community! I say that with a slight dramatic turn, because the thing you see when you enter a graveyard are the surnames of their relations still living within the towns.  Follow the chat boards and people still recall old school days, people who have recently died and in which house they had lived all their life.

Life is a narrative, just as history is.  We add or subtract from that narrative, when we come to impose our vision on the landscape around us, we mark it for the future.  Paul Knight's essay was caught up with the great farming dilemma we are in now.  Millions of trees are supposed to be planted for carbon capture.  He stops at an old meadow that has escaped the pesticides and herbicides and had been 'preserved'. In 2014 half of the meadow was planted with trees before it was realised that a rich inheritance of wild flowers and their seeds were part of the meadow.  What do you do? Both were left with a 'messier' edging to the meadow.  Anyone who knows the current jargon of the moment, that it is the 'wilding' part.  In fact the meadow with its wild flowers had become a 'bank' for seeds.

We cannot go back only forward, every action now has consequences for the future, occasionally we must stay the hand and just allow those remnants of history to fall through and remind us that once long ago other people lived and were part of a community.

One thing I have learnt from living here, is the strong conviction of fellow Yorkshire bloggers of the roots of co-operation and socialism that underlies these Northern towns, forget our London-based government, who know little of nothing.  Start turning to the people who actually are in control in our towns, argue with them maybe, but allow that bright spirit of community to register its vote.