I was going to start with megalithic photos from Cornwall that appeared today in memories.  But another memory sailed by.  A couple of days ago in TMA someone had put up a drone photo of, for me,  a rather mysterious stone assembly in the Preseli Hills.  It rises from the plain as an untidy jumble of stones but within the stones you can find enclosures, whether for cattle or horses who knows.   Also there are 'Cheval de Frise' walls, either for defence or for keeping the animals in.  A Cheval de Frise wall can be seen in medieval wars when stakes are stuck into the ground pointing outward to stop the enemy, this form of defence starts as early as prehistory and there is another Welsh site (Bryn Cader Faner) that has a more spectacular one.  Here is the one at Carn Alw . 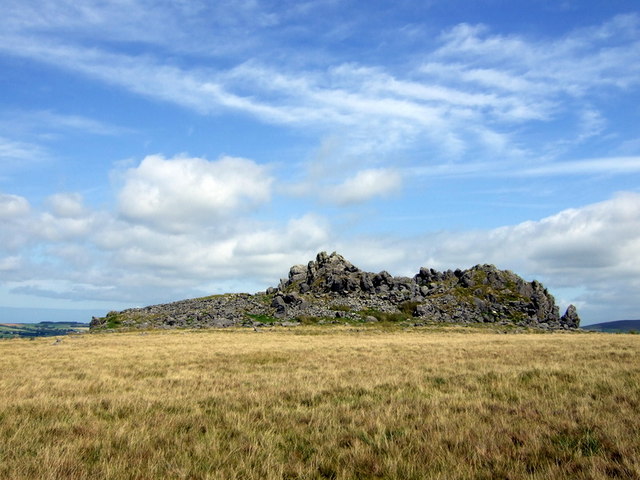 A photo of the stones which seem to form a pathway here in this photo.  Taken by Toby Driver in 2006.

There is magic in prehistoric stones as we try to guess their significance to the people who once lived and used them to build their religion, houses, and defences.  But the magic lies in the landscape as well.  Carn Alw always intrigued me, it was a long way from where I had left the car when I was visiting Foel Drygarn with its three spectacular barrows set on the crest of this settlement and I never visited at the time.  Wales is indeed a land of mystery and landscapes too difficult to farm so that its past inheritance of old churches and megalithic stones still lie scattered around.  The Preseli Hills was a place I wanted to move to but Paul felt it was too far out in the wild - bless him.

But if I could have lived in a place where the unfathomable surrounded me I would have been quite happy trying to unravel the mystery.  And if you don't believe me, fall under the spell of the soft Welsh lilt of this short video on Foel Drygarn....