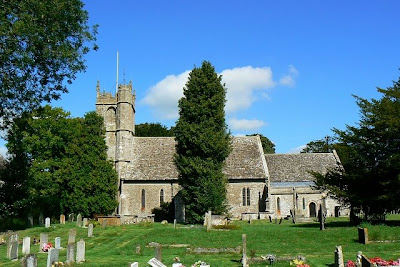 Whilst meandering over the xmas period, we saw two churches, one in Essex and the other in Wiltshire. Both were freezing cold inside and one wonders what the parishoners of old thought about their weekly sermons amongst cold grey stones, the Welsh poet R.S.Thomas had plenty to say about the misery of believing in God in what he must have thought of as godforsaken chapels.
There is a luminosity to the Downs of Wiltshire, especially when it is frost tinged, I suspect partly because of the white chalk underneath the grass, giving the atmosphere a lightness of touch that you do not find in the great brown ploughed fields of Essex.
The church at Broad Hinton, Wiltshire, is late and there does'nt seem to be any trace of Saxon, there is a 17th century print of a 'new rebuilt' church in 1656, and fine stone workmanship in the interior, a painted font, and a 'stigmata' carved stone for the 'Lord' of the manor, I shall consult Pevesner on this one, but even he is known to have missed some details as he records the history of these churches.
He says that it was heavily restored by Ponting in 1879, and that it was probably built late 13th century, all that is left are Norman fragments at the end of the nave, which include a capital and a respond with naturalistic carving. 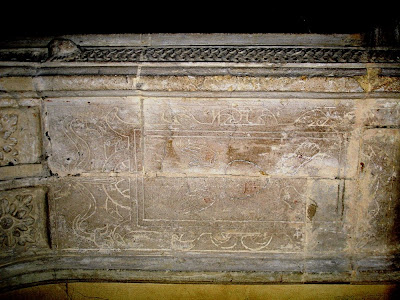 Pevsner says of this Elizabethan inscription of the 'canopy incised cross and hands,feet and heart of Christ' that it is a fine tomb-chest, it is the tomb of Sir Thomas Wroughton and wife 1597. 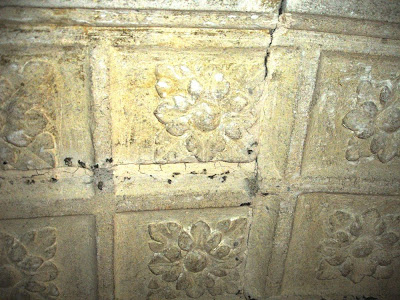 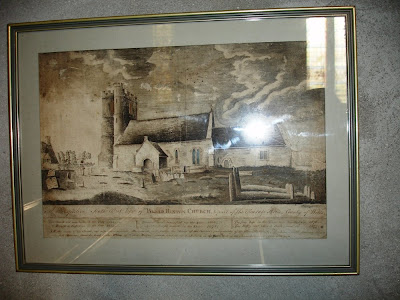 although I did'nt take a photo of Broad Hinton, it can be seen in this print the small stair turret attached to the tower, the Pleshey church also had a tower. 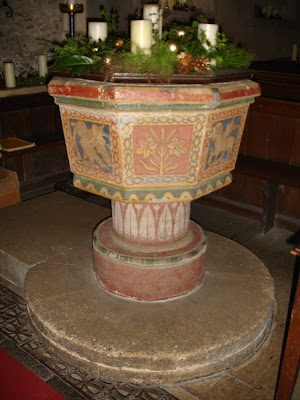 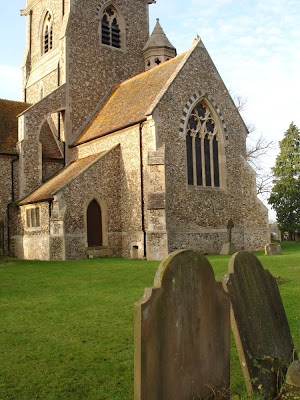 The fine flint Pleshey church, its Norman background comes from the Norman motte and bailey Castle Mound to be found in the Village.
Notes; taken from British History online
"The watershed between the Kennet and the Bristol Avon divided the ancient parish into two contrasting parts. The division runs from southwest to north-east, approximately following a line from Cockroost Farm to Quidhampton Wood in Wroughton. South-east of the line is the Kennet valley, 4 km. wide between the watershed and Hackpen Hill, which reaches 269 m., the highest point in the parish, and marks the boundary. Most of the arable land of the parish was in the valley and streams there were used to float water meadows. One stream rises outside the parish north of Uffcott, another near the farmstead called the Weir; they meet 900 m. south of that farmstead. Chalk outcrops both in the valley and on the downland of Hackpen Hill, which was used for pasture. Settlement in the south-east part of the parish was concentrated in the nucleated villages of Broad Hinton and Uffcott. North-west of the watershed the parish extended halfway across the Avon valley, sharing a straight boundary with Wootton Bassett. A little west of the watershed Broadtown Hill and the ridge which extends north-east of it reach heights above 198 m. and mark the northwestern limit of the chalk; a white horse was cut above Little Town in 1864. On the western slopes of the hills are bands of Upper Greensand and Gault. Beyond them the Kimmeridge Clay forms level ground below 107 m. A stream west of Broad Town Lane is fed by tributaries and flows north into Brinkworth Brook. The plain and the hills west of the watershed were used mainly for pasture and settlement there was in scattered farmsteads. In the 11th century there were 4 a. of woodland at Bincknoll, probably on the ridge, and in the 14th century Bincknoll Wood was of 25 a. The wood stretched east beyond the parish boundary and west to Little Town in 1766 ) but it has since contracted and in 1981 extended 1.5 km. south-west from Bincknoll Castle.
The area of the parish richest in archaeological evidence is Hackpen Hill. There are several barrows and a rectangular earthwork on the downs and some supposed eoliths were found there. East of the Weir is the site of burials and perhaps also of a house of the Romano-British period. Bincknoll Castle, a fortified enclosure of 3½ a. in a commanding position on the northfacing ridge near the eastern parish boundary, may be of Romano-British origin but was re-used in the early Middle Ages.