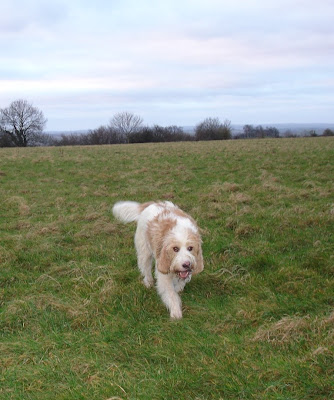 
Today has been solstice day, the turning of the year before christmas. Up at 8 this morning walking with friends there was no sun to be seen, only the bare landscape shorn of it vibrant colours. Then there will be January and February, a grey, grey landscape and then one day colour will appear and the year will make its way through its annual pilgrimage.
The dogs bounded around, Monty rolling as always in some deer poo, and his small companion added to the wafting perfume by rolling as well. Moss interested in his ball was scornful of such antics, though he likes to roll, but only in the dew.
So is today solstice or will it be tomorrow, such arbitary dating it to the 21st, the sun takes no notice but comes up each morning to remind us that there is a rythm to life, as it was all those thousands of years ago. Walking back down the racecourse and in the distance is Cherhill Down, and absent mindedly I can place Silbury and Avebury to the left of it 30 kilometres away.
Here on this racecourse with its remnants of old bronze age barrows, did the people who built these barrows also look up into the distance and think of the Avebury settlement, perhaps they had relatives there and would make an annual pilgrimage.
But what thought started this thread was the Springfield Cursus, and an explanation from John North will suffice; 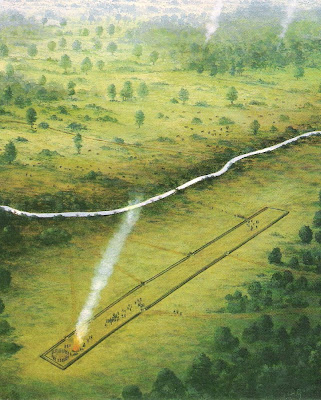 "The Springfield Cursus is not far from the River Chelmer in Essex. It was some 40 m wide and 670 long m long, and a pit surrounded by a semi-circular ditch abuts the southern ditch at 200 m from the eastern end. There are in the vicinity traces of various other monuments, including possibly an oval longbarrow, and at the eastern terminal there has been a ring of posts (about 26 m in dia), possibly placed there at a late date in its history. In the neighbhourhood of the Springfield ring there were many small pits containing burnt flints and cremations of cattle, sheep and pig. There is no firm evidence as to date, a find of Mortlake pottery in a ditch inclined the excavators of a date at the end of the third millenium or late" Maybe potential alignments on Spica, Pollux and alpha Centauri (34th C bc)"
Posted by thelma at Sunday, December 21, 2008