The village of North Stoke 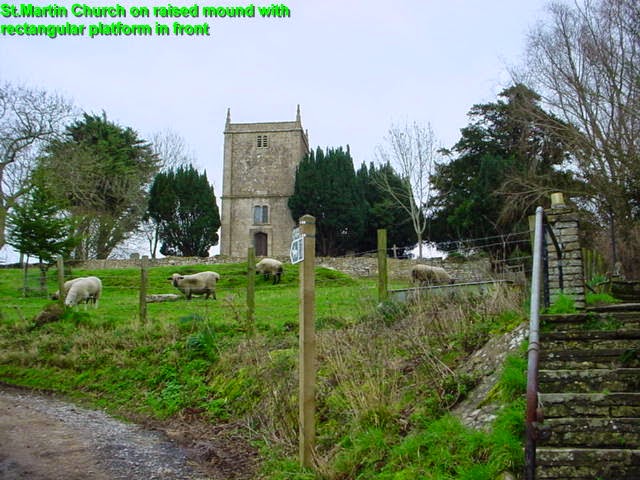 Telling stories, as I have wandered the landscape so the stories unfold and you begin to realise that now this moment is just that, below you on this very spot you stand, thousands may have walked, led lives, even settlements lie under you feet all now dead and forgotton, crumbled into dust so that only the imagination can fill in the spaces.  Therefore when you approach history or archaeology you are picking up fragments from the past.
So it has always been with me, I wandered a part of land called the Lansdown for 25 years, such knowledge allows you the place of the deer, the short legged muntjac early morning, the golden plovers nesting in the ground, the fox coming home from a night's hunting.  It also brings up the ghosts, and before I embark on my original story about North Stoke that lies just below the Lansdown let me begin with unusual happenings.
Ghost stories maybe, firstly there was that early Sunday morning walk, the downs were covered in fog, Moss loping by my side went onto red alert, every muscle straining to see through the fog, he started barking as a figure emerged through the fog, even my heart was beating, Moss had hysterics, normally he is a sensible collie, but this figure that emerged was wearing a tam o shanter, and a kilt to boot, truly Scottish, in fact was so strange that ghost seems a normal way to describe him, he passed by a cheery greeting and was gone, was he a ghost? or some drunken fool walking back from somewhere, who knows!  One person who walked the downs and had 'the sight' told me of his wife seeing an old soldier  limping back along the same path from the battle of the Lansdown from the Civil War of the 17th century, now that surely was a ghost.  A friend had a similar experience, riding along on his motorbike in the lane at night past Dyrham House, and passed an old fashioned gaitered man.  He stopped and turned round, but could not find the old man, though there was no place for him to vanish...
So North stoke, a small hamlet with a Saxon place name meaning that it was a small Saxon stead to the north of Bath.  I think at one stage it had a small monastic foundation in the 7th century.  The village is set half way up a hill, and looks down on the road out of Bath to Bitton, Keynsham and Bristol, in fact it would have been the old Roman road to the port of Ebona, and called Via Julia but according to some sources this is wrong.
The church of St.Martin stands on the hill, with a fast flowing brook beside it, in fact it is a 'water spout' that emerges just above on the hill.  This itself gives credence to the fact that the church had a long history and was built on a Roman villa's foundations, though this has never been excavated, and cannot therefore be guaranteed but what I have read of the place, the foundations of the church are slightly askew, and given that the name St.Martin alludes to a very early saint. There is nothing spectacular about the church, there are a collection of old yews in the churchyard and the church itself stands above the manor barn and a few old cottages just about makes up the sum of the place.

So who was St.Martin of Tours, AD 316 to AD 397 and short biography would put him as a Roman soldier turned christian, for a fuller biography you will see he did not step into England, but lets allow the story to be embellished for the sake of the Roman villa in North Stoke, and there are a number of churches named after him in England, and his story is interesting.  Here is a description as he came upon the 'pagans' (people who lived in the countryside).....
As bishop, Martin set to enthusiastically ordering the destruction of pagan temples, altars and sculptures. Scholars suggest the following account may indicate the depth of the Druidic folk religion in relation to the veneer of Roman classical culture in the area:

"[W]hen in a certain village he had demolished a very ancient temple, and had set about cutting down a pine-tree, which stood close to the temple, the chief priest of that place, and a crowd of other heathens began to oppose him; and these people, though, under the influence of the Lord, they had been quiet while the temple was being overthrown, could not patiently allow the tree to be cut down".

In one instance, the pagans agreed to fell their sacred fir tree, if Martin would stand directly in its path. He did so, and it miraculously missed him. Sulpicius, a classically educated aristocrat, related this anecdote with dramatic details, as a set piece. Sulpicius could not have failed to know the incident the Roman poet Horace recalls in several Odes, of his narrow escape from a falling tree.

The felling of 'sacred trees' in Ireland is documented in the old  celtic tales, and I have often wondered if the tree carried on the shoulders of the Celtic soldiers on the Gundestrup cauldron, is a sacred tree won from their enemy.

As I wind this story round it several routes, landscapes interlacing with histories, it is well to remember that at the great temple of Roman Bath, there would have been this magnificent face of the Celtic 'guarding figure' over the portico of the door, the Romans had meshed their gods with the local deities, perhaps I would rather use the word 'nested' a comfortable mythology to spread good social order on the natives.

Footnotes;
1) The great celtic head above, dramatic and a very fine sculpture, Roman or native no one knows, has of course a part in celtic history and as Ann Ross says, maybe she is exaggerating slightly ,"the Celts venerated the head as a symbol of divinity and the powers of the otherworld, and regarded it as the most important bodily member, the very seat of the soul.  but the head  of the vanquished  played a role in battle, and was often kept as a trophy afterwards. Sometimes visitors to Roman Bath see it it just for the hot baths when in actual fact the temple was a fusion and meeting place of many people in Roman times, including pagan worship and druids.


2) This road may, for convenience, be said to start from Bath. But it seems to have been regarded in Roman days rather as a continuation of the route from London, than as a road from Bath to the west. It does not, strictly speaking, start from Aquae. It diverges from the Fosse at Walcot church, half a mile east of the Roman settlement, and runs on westwards without entering the Roman area. Through modern Bath its course is roughly represented by Guinea Lane and Julian road. In Victoria Park it may have been joined by a road from the west gate of Aquae. But the evidence for such a road is scanty. It does not include any trace of an actual roadway and rests mainly on the probabilities of the case. Thence our road continues through Weston, mounts the neck of high land which joins Kelston Round Hill to Lansdown, runs close beneath North Stoke and drops sharply to the Avon valley and the 'station' or village at Bitton. ......
Posted by thelma at Sunday, August 31, 2014