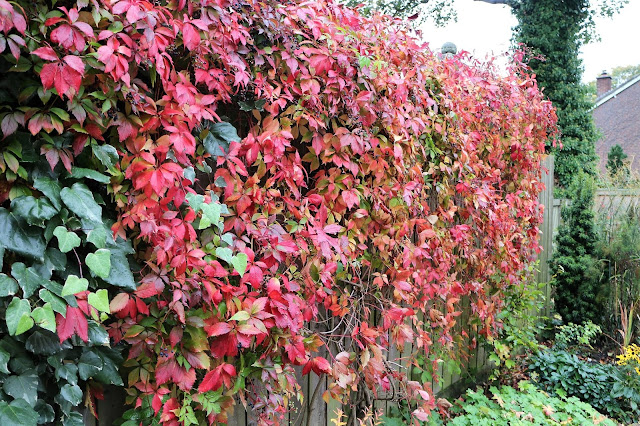 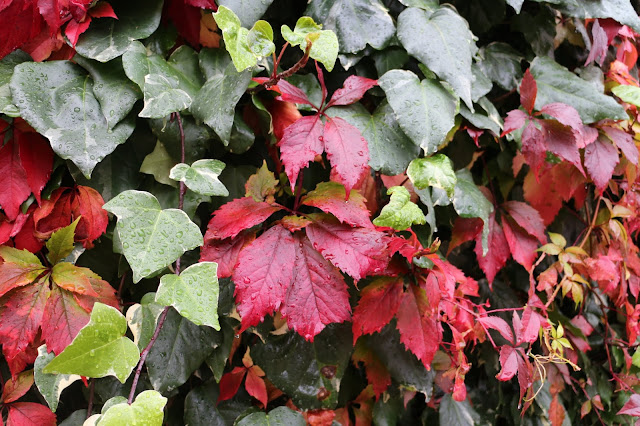 Virginia creeper turns red as Autumn and storm hits the country.  We have a very long length of fencing covered with several of this creeper, interspersed with ivy.  A haven for sparrows, the hedge is always twittering with their noise.

What else, my print was finished by the framer last week, it coincided with the sad news that hares in the East of England had the dreaded rabbit disease myxomatosis.  Coming across a sick rabbit with the myxi is a  sad business.  I look at this print across the table and often think what other species may be going extinct around the world as I sit there. But yet should I really worry about these deaths of animals when across the world in Yemen, millions are starving.  It breaks through the noise of news lightly, the media is more worried about sanctioning Saudia Arabia on the death of the journalist in their Embassy - moral ethicacy has a long way to go. 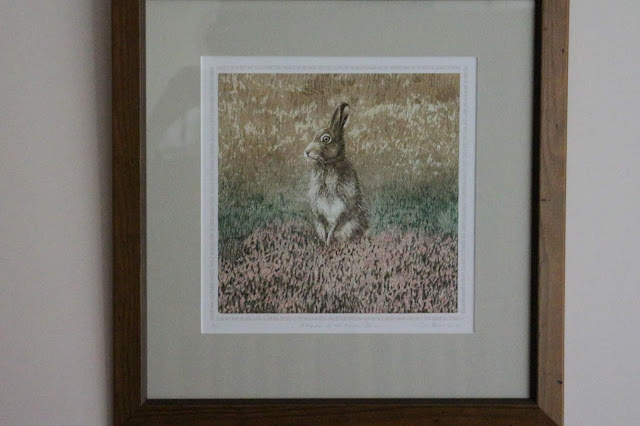 Looking at the photo yesterday of the meeting  at the Tibetan monastery, I think perhaps maybe sitting down and contemplating the questions of life was not a better way to go, or perhaps become a 'Stoic', which came up in an article this morning.

Stoicism is a school of philosophy which was founded in Athens in the early 3rd century and then progressed to Rome, where it became a pragmatic way of addressing life’s problems. The central message is, we don’t control what happens to us; we control how we respond.

A poem for the hare

In the quiet wait for September's early packs to lift and charge.
Wide eyed.
Like he's just walked into a room
And can't remember what for.
His white tail bounces after him - the ghost of last winter
That won't leave him alone.
Soon it will catch up with him
And spread its baby soft blanket over his back.
But now he's a blend of summer and winter
A flake of the moor's skin.
Elven grey brown fading to silver.
With pencilled details that focus my eye on his.
I'll just go this way If that's okay? he says.
And with a freeze-frame lollop passes the butts.
Turns at 90 degrees down the rubber scarred stones.
Then back to the tussocks to continue his lazy days.

He too gives himself a hug every morning.