I never thought I would watch a whole series of tv programmes but I did in 'Hinterland', believe it is called binge watching but there we are.  What has captured it for me is the wonderful northern Welsh landscape. The sheer miserable tone of every episode, the two protagonists never smiled, locked in the misery of their own lives.  The ruinous cottages with skulking scary people inside and frightening moments as we went up decrepit stairs.  How the production team managed to find such farmhouses I don't know, but as the murders unfold, the settings were beautiful.
I am often moved by landscape, Cornwall moors haunt me, Wales, have been in love with the hills since childhood, I think it is the sheer loneliness of the countryside so different from our English hotch potch of villages.
But the weekend went well, the traveller returned complaining bitterly of overcrowded trains and what a terrible place London was.  But his joy in his grandson who calls him grandpa cannot be taken away.  This little family are very busy in their world trying to survive the calamities of jobs that are not as secure as they could be. 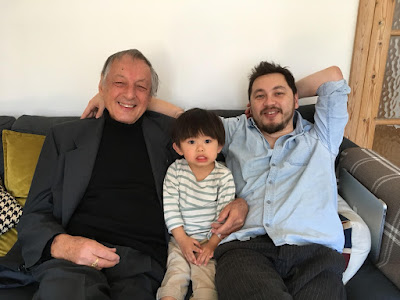 Leo's mum. Yuki is Japanese, and she oftens goes back to Japan to see her family, there is talk of  them moving to Japan which would be sad, but Leo has both languages. Ken, Paul's son has a job with the Telegraph, but with all the newspapers going online who knows.....
Leo is apparently a whirling dervish of energy, but then it has been a long time since Paul has met any toddlers.  I hope they make the effort to come and see us down North, Paul would love to show Leo the countryside (something he has only just fallen in love with himself!) and the sheep, chickens and of course Lucy.
So the Joy of Sake  party went off well, in typical London fashion of course, you were handed a little Japanese sake cup, and then tried the different wines, drawing them from the bottles with pipettes. 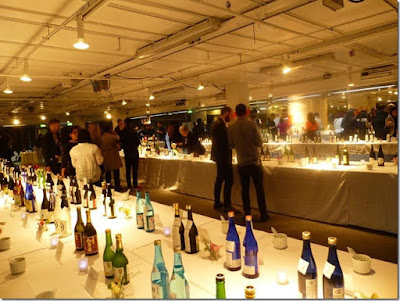 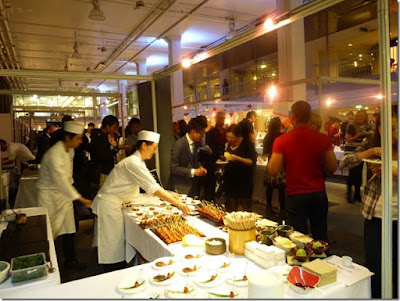 And something Cro said about grandchildren being artists in the new life, well Aethan, Pauls' other son is an artist and sells his work, but his main work is handling exhibitions for galleries so there is a living to be had.
Posted by thelma at Tuesday, October 02, 2018