A trailer to a film about three children and two donkeys. Probably a bit sentimental like the 'Railway Children' but its landscape of the North Yorkshire moors should be captivating. See the ruined abbey above the headland at Whitby. The old steam railway as it smokes its way though the narrow valley of the moors, the purple heather that lights up the dingy appearance of the moors, then remember the pale sky blue harebells and cotton grass fluttering in the wind.
Whitby has a magic all its own, full of people in summer, it's Victorian overly religious feel with all the churches that dot the town. There were donkeys on the beach when I first came to Yorkshire.
To experience Whitby, your nose will pick up the smell of fish and chips, the cry of the seagulls as they raid this palatable fare.  Here is the penny machines of old, there is the jet museum, full of the black art of jewellery.  Alleyways lead to pokey little cottages beloved of the holiday home brigade.  And of course the Gothic element, who can forget Dracula pacing about in St.Mary's churchyard.  Forgot, he is a fictional character, I remember Paul standing on the other side of the water judging whether the heroine could hear the goings on in the church yard across the quay.
I owned a  cottage once, next door Jim and Mary (going slightly mad) she would push complaining letters through the door about the noise made of building works that went on in 'Pottery Cottage'  as she only got up at 10.0am. Up the steps that lead to another cottage lived Fraser in a sort of basement flat with the clutter of his vagabond life stacked neatly outside.  These were our neighbours, the family would creep by them unsure of their heavy Yorkshire accents and Fraser's Scottish one.
I loved that little 18th cottage facing on to its small yard, opposite the windows of an estate agent.  It was tiny with those steep stairs up to the two bedrooms, the great stack of the fireplace running through the house, the coffin drop in the cupboard.  Think about it, if you died in your bed, those stairs were useless, I remember someone getting stuck behind a double mattress on a turn of the steps and everyone collapsing into sheer  laughter as we tried to solve the problem.
Maybe a blog of how it was transformed from the moment we first saw it, with a terrible tartan carpet on the floor and a bathroom that could have come from the 1970s into its present shape.  When sold I left the beds and furniture in situ, also the curtains from Habitat but not my settee which they wanted!. 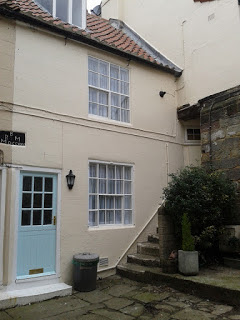