Once a long time ago, I stayed in a cottage in Avebury in winter.  There were three of us staying but only two made it, Paul and myself, and so we roamed round the churches and footways of Avebury.  It was the beginning of our relationship.  The cottage was tiny, it was the teacher's cottage, and being the cold months of winter, freezing cold, Moss came with me as well.

I had spent many years wandering round the Avebury landscape, its magic, its prehistory formed a part of my life as it did Pauls.  You can prod at prehistory forever but you will never get to the secrets of the Neolithic, of the great long barrows and round barrows.  Look round and you will see them all over this world, stone places of burial and ceremony.  Lying in the ground, the farmers make their way around them but leaving them there because of the difficulty of moving several tons of stone, they are a testimony to a different time.  See the lane that follows The Avenue of Stones from Avebury and you realise that many a modern road has been built on an old road. The past dictates us even today.
The day came though when the snow arrived, so in the dark of early morning we set forth to explore Avebury in its soft bed of snow.  It was so exciting, the snow still sleeted down but there was no other people around, other photographers only arrived several hours later.  This was once in a lifetime happening, Paul who was never the greatest walker in the outside world was even ready for the expedition though his footwear was hardly suitable. We battled the sleeting snow and wondered at the starkness of the stones in the white.  The little Kennet river still ran but everywhere a winter wonderland.  Moss sitting in the snow ecstatic, he always loved snow! 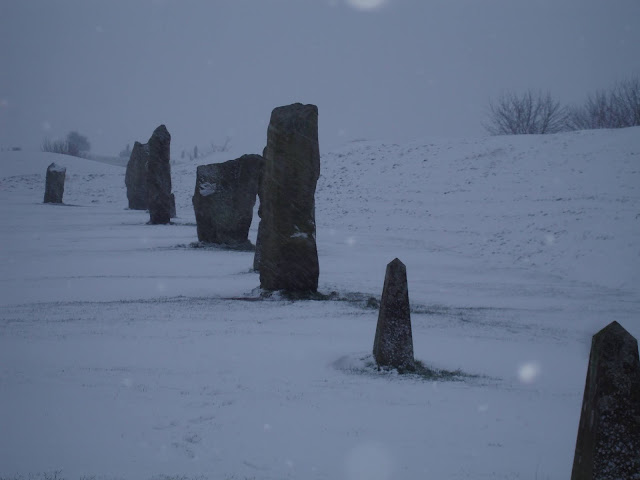 A walk down memory lane I think ;)