Scapegoating; I don't like cruelty in any form but Corbyn was put out to dry, to pay for the sins of the anti-Jewish feelings in the Labour party.  I am not even a fan of Corbyn, but he is a man of principle, as is Starmer.  I listened to Starmer this morning, an adept speaker, moderate in his tone, the very epitome of a leader, and especially of the Labour party.  But suspending Corbyn immediately after the report came out, on the evidence of what Corbyn had written was shameful, it stinks of 'well here is a chance to get rid of him fellas'.  It won't go down with fair minded people though.

Treading carefully here, for I know little of what has been said against Jewish people, only seeing Margaret Hodge get her knickers in a twist about it, and I like Margaret Hodge as well for her needle picking mind at enquiries, so there must be evidence. Rant over.

The other thing to spring to mind was being buried in a bed ;) I belong to a Patreon Group called the Prehistory Guys, and yesterday they were discussing a burial, late Neolithic I think in which the primary burial was buried in the crouched position, with 'four hoof and horns' cattle hides at his feet.  But an adjacent burial mound had the occupant sitting upright facing the first barrow.

It reminds us that earlier burial ceremonies were different.  You went into the realms of death/sleep, with all your accoutrements of life, food and drink.  To bury four oxen is surely a sign of wealth.

But it brought to mind the 7th century Anglo-Saxon bed burials, mostly of women. The first one is on the East coast, at Loftus, and the burial in question is called a person of royal lineage, though in truth she maybe an Abbess but who knows.  Evidence that remains are nails and cleats, and the staining of the wooden boards in the soil.  This Anglo-Saxon burial ground had many burials though and the women were all buried with exquisite jewellery as was the bed burial 'princess'. 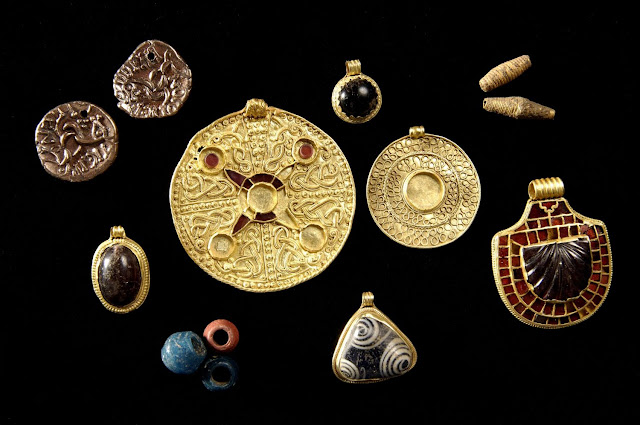 In the seventh century during the Anglo Saxon period, there was a period of time when paganism was giving way to Christianity, so that often you would find the two traditions side by side.  The North gave way to Christianity strangely through the manipulations of a Kentish princess, Æthelburh,  who married Edwin of Northumbria in the late 6th century.  It is good to know that Anglo-Saxon women were so strong in their own rights.