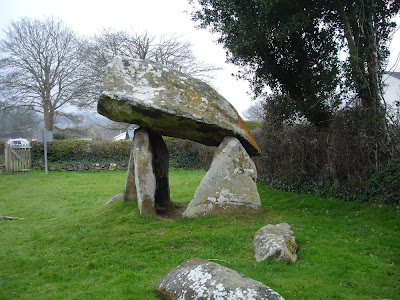 When people write about this small dolmen they talk of mushrooms and fairies, and it does indeed sit tranquilly in its own little garden surrounded by a surburban small settlement of bungalows. Coetan Arthur was excavated in 1981, there had been a build up of plough soil over the centuries and in fact, the stones would have had another metre added to their height originally, making them much taller than they are today. There are four stones theoretically supporting the capstones, but only two are in contact. 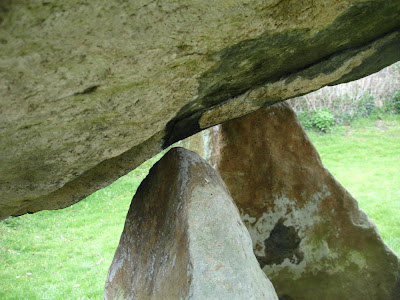 One of the marvellous things about neolithic builders, is their ability to balance a huge capstone on a fine point. Think of a stiletto heel, its fine point bringing all that excruciating pain on to someone's foot, the weight of a person concentrated on a small round five pence bit. So it is with the capstone pressing its enormous weight down, thrusting it through the upright to secure thousands of years permanency - it gives one pause for thought. 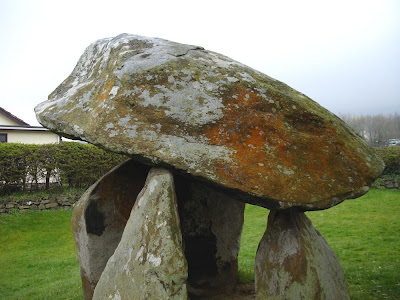 Carreg Coetan is low-lying, just eight metres above sea level, close to the Afon Nyer estuary and about half a mile from the coast. To the south is Carningli, and the usual legend has been attributed to the stones, that they were thrown from the summit of the mountain. According to George Nash, the capstone when aligned with Carningli peak seems to match it.
Turning to N.P.Figgis on the subject, he cites a recent excavation which gives Coetan Arthur a somewhat different history. It had been presumed up till recently that the tomb had a closing 'portal door' and that its corresponding upright stone had disappeared, it was in fact an 'H' shaped portal dolmen similar to Pentre Ifan. It seems though that there never was a third stone, so no portal door. An arc of small stones had been laid like a kerb to the south round the remains of the mound, and between it and the now supposed 'front' of the chamber a space had been cleared. In front of the chamber had been a platform with some pottery and 'clumps' of cremated bone.

Radio-carbon dating gives the early date of 3500 years old for the construction - middle neolithic. But also inside the chamber there had been found much later Grooved Ware and Beaker Ware, showing that it had been in use over a long period of time.
Figgis goes on to speculate that perhaps we should not fall into the easy trap of labelling these sites as chambered tombs, but that they may have had a mulitiplicity of functions, which is little understood today