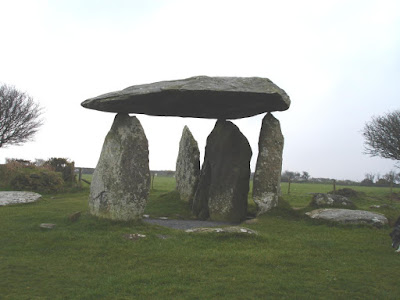 This is a chambered long cairn and the remains of its mound can still be seen. Set high on a hill, with, at the moment, hundreds of sheep and lambs cavorting around, this is one of those spectacularly rocky places, with stones protruding from the ground everywhere. Soft turf and chunky turfed walls add to the charm of the surrounding rather deserted countryside. The capstone looks rather like a flying saucer, elegant with two shaped orthostats framing the stone portal door, this is seen as a sophisticated design, but perhaps we are looking with modern eyes, given the chunkiness of Coetan Arthur and Carreg Samson's capstones, the ideal of beauty is in the beholders eye. Who is to say; maybe the neolithic builders felt that the erection of great heavy capstones was a work of great physical strength and prowess and deemed far worthier than puffs of the wind sailing capstones that Pentre Ifan represents.


Its capstone is tilted towards the Afon Nyer Valley to the north, the chamber being about 3 metres long by 2 metres wide. It was originally cut into the ground about 40 cms and lined with drystone walling, but has recently been infilled. 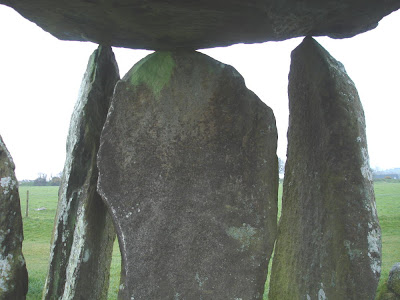 There is a blocking stone(doorway) in the forecourt area. Apparently there is supposed to be a cupmark on its outer face, but have stared long and hard could'nt find it- so I shall put it down to wishful thinking on someones part.


According to Nash it is a terminally chambered long cairn with a semicircular forecourt set in the southern end of the barrow - a Closed Portal Tomb. Glyn Daniels compared it to the so-called "horned cairns" of Carlingford in Ireland. Not surprising really its just a short hop over on the ferry to Ireland. Interestingly he also suggests that our more easterly Severn-Cotswold tomb group is derived from the Pentre Ifan type, perhaps that is why I am always drawn to this part of Wales - the sense of the familiar. 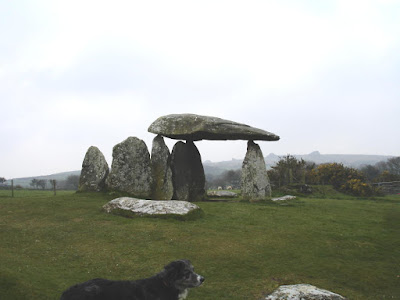 Grimes, another archaeologists who trod the ground round Somerset as well, excavated in 1936 and 1958, and he described the forecourt where ritual feasts may have been held, it consisting of two orthostats placed either side of an entrance, itself blocked by the massive 'closing' door. This door is of course speculated upon wildly by archaeologists, maybe it was open on occasions to bring in bodies that had been stored elsewhere. Maybe, it was a great chieftans tomb, with his retainers being sacrificed with him (bit dubious). Or in fact was a false door, the bones of the dead being inserted from the side of the mound.
The mound does not survive, but could have measured about 40 metres long by 17 metres wide. There are traces of kerbing stones, but they do not always align with the mound, and it could be linked with possible ritual pits.
Nash points to the dip in the capstone and the slope of Carningli, both point to the sea and the Afon Nyer Valley. This I could'nt see, being misty and very cold but I did find one of the fallen stones rather beautifully white with lichen and, a bit like a 'jewel 'stone, a rather rounded female stone. 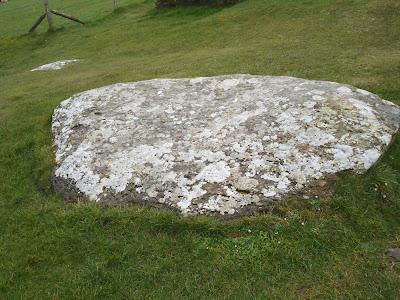 Brynberian's Bedd y Franc is not far from this tomb, but failed miserably to find it, though I drove down three lanes, perhaps it was the fourth quarter at the crossroads, but welsh signposting has a logic all of its own, a GPS would not come amiss.
N.P.Figgis in Prehistoric Preseli gives another theory; there is a fallen stone, that remained in situ as the stones of the burial chamber were put up. This may have been a first phase, a single standing stone with a fire pit near to it, making this a dual mortuary site, or at least, a site that was in use over a long period but again all conjecture, with the stone being part of the first chamber building and single unembellished facade, with short mound. "The latest elongated tapering mound, and the elaborate facade covered the whole of the earlier structure". 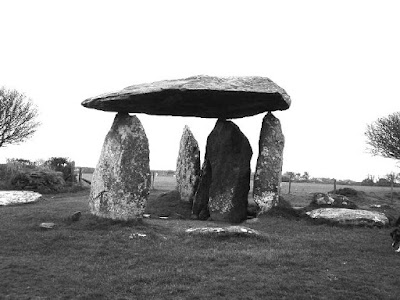