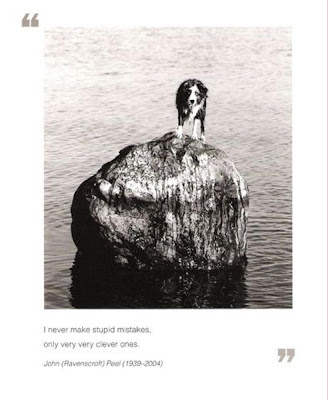 "The traveller who wishes to approach Stonehenge most fittingly should keep along this road, crossing the little river Till at Winterbourne Stoke. As he reaches the quiet crossroads on the summit, he will be on the edge of one of the greatest, and certainly the richest, congregation of burial mounds in all Britain. Here was a kind of vast scattered cemetery on ground hallowed by its proximity to the renowned sanctuary. Barrows cluster round Stonehenge on all sides - three hundred of them - but here to the west is the greatest concentration and the area most sequestered from the blighting military activities of Amesbury. Close within the north-eastern angle of the crossroads is a well preserved longbarrow and its spine acts as a pointer to a line of round barrows starting just beyond the small wood. These in their range of forms make a typologist's heaven. First there are two striking bell barrows and on their left two disks - one of normal type, the other with twin tumps. Just beyond them is perhaps the best known example of that rare variety - the pond barrow - which consists of a circular depression with a low bank on the lip. Back on the line of bells are four bowl barrows, and there are many more of this type beside the left-hand road as it leads very happily northwards to nowhere.
This completes the enumeration of this famous group, and I will not attempt another. When the ritual and whatever its accompaniment may have been of masks, effigies and offerings have vanished so long ago, when there is no stir left of emotion and the ghosts which emotion keeps alive, when the very people responsible for raising these mounds have been overwhelmed, absorbed and forgotten, then their detailed study can become lifeless enough.
Better perhaps to look at them with knowledge but with the knowledge unexpressed, these round barrows that are like the floating bubbles of events drowned in time."

The following is taken from H.J.Massingham - English Downland, first published in 1936 by Batsford. and is dedicated to;' members of our Avebury party'...

"So with Stonehenge. The hoary grey pile exercises a magnetic pull over all the roads of the south, the south east and the west. It holds the reins of all the roads in its fist, from the Isle of Wight to the scalloped escarpment of the Marlborough Downs between the headlands of Tan Hill and Martinsell, and from Bearminster to Beachy Head. So deeply buried in the unrecorded past are these twin realms (Avebury) of ancient Wiltshire that they have left us a mighty graveyard only, and nothing more, not even an inscription upon the tombs. Yet the chalk country belongs to them still, and of this mystery all who travel it are conscious. Their tombs themselves are little rounded headlands and promonotories, their roads and banks the very gestures of the downland manner, the peace in which the barrow-builders dwelt together caught a breath of that lofty repose that clothes the downs themselves. The downs were the high places of their cult of life and death. But we, step upon their springing turf as aliens, or at least with the dim awareness of having strayed and of seeking once more the ancient mother of our race.
I am myself convinced that the consecrated places of Avebury and Stonehenge are the fruits of two separate waves of colonial adventure. Stonehenge with its highly formalised cult and its horseshoe of great Trilithons so exactly resembling the Lion-Gate of the pre-hellenic Peloponnese, bears the mark of a more direct influence from Cretan Mycenae. The tympanum of the Lion Gate reveals the older and simpler religion of the Goddess of Earth overlaid with the state and political (as opposed to elemental) creed of the sun, which was mainly kingship. Stonehenge is not merely the most finished stone circle in Europe; it is a monarch of stone circles with a court, a church with a churchyard inseperable from it.. This court, this churchyard consists of the multitude of barrows mostly round, which are set along the slight ridges in various groups, often in definite alignment, within an area of 12 miles of the temple. There are longbarrows and bowl barrows, bell barrows, saucer barrows and disc barrows to the number of more than 300..........
The Temple of the Plain was something of an observatory as well as a house of deified presences; it had its Cursus for the sacred spectacles and ball games between the sky and the underworld, whilst its circle of bluestones, geoligically distinct from the sarsens of the Trilithons, were carried all the way from the Prescelly Mountains in Pembrokeshire. These and other evidence all point to the highly organised cult of the sun being more prominent at Stonehenge than at Avebury.....

Stonehenge...."It stands as lonely in history as it does on the great plain whose many tinted green waves, as they roll away from it, seem to symbolise the ebb of the long centuries which have left it so portentously unexplained. You may put a hundred questions to these rough hewn giants as they bend in grim contemplation of their fallen companions; but your curiosity falls dead in the vast sunny stillness that enshrouds them, and the strange monument with all its unspoken memories, becomes simply a heart-stirring picture in a land of pictures. It is indeed immensely vague and immensely deep. At a distance you see it standing in a shallow dell of the plain, looking hardly larger than a group of ten-pins on a bowling green. I can fancy sitting all a summer's day watching its shadows shorten and lengthen again, and drawing a delicious contrast between the world's duration and the feeble span of individual experience. There is something in Stonehenge almost reassuring to the nerves; if you are disposed to feel that the life of man has rather a thin surface,and that we soon get to feel to the bottom of things, the immemorial grey pillars may serve to represent to you the pathless vault beneath the house of history"..... (! portentous)

about pewits on Salisbury Plain near Stonehenge: His Winter and twilight cry expresses for most men both the sadness and the wildness of these solitudes. When his Spring cry breaks every now and then, as it does to-day, through the songs of the larks, when the rooks caw in low flight or perched on their elm tops, and the lambs bleat, and the sun shines, and the couch [grassy weed] fires burn well, and the wind blows their smoke about, the plain is genial. . . . But let the rain fall and the wind whirl it, or let the sun shine too mightily,
writes Thomas, and the Plain becomes "a sublime, inhospitable wilderness. It makes us feel the age of the earth." Thoreau had called English poetry "tame and civilized." For Thomas, the wintry plain proves "the earth does not belong to man, but man to the earth."

On Avebury; The great stones were then in their wild state, so to speak. Some were half covered by the grass, others stood up in the cornfielda were entangled and overgrown in the copses, some were buried under the turf. But they were always wonderful and disquieting, and as I saw them, I shall always remember them... their colour and pattern, their patina of golden lichen, all enhanced their strange forms and mystical significance....... 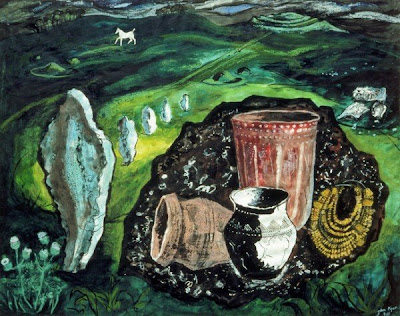 And so to a youthful Morris writing home to his sister from Marlborough College;

...."On Monday I went to Silbury Hill which I think I have told you before is an artifical hill made by the Britons but first I went to a place called Abury where there is a Druidical circle and a roman entrenchment both which encircle the town originally it is supposed that the stones were in this shape first one large circle then a smaller one inside this and then one in the middle for an altar but a great many in fact most of the stones have been removed so I coud not tell this. On Tuesday morning I was told of this so I thought I would go there again, I did and then I was able to understand how they had been fixed; I think the biggest stone I could see had about 16 feet out of the ground in height and about 10 feet thick and 12 feet broad the circle and entrenchment altogether is about half a mile; at Abury I also saw a very old church the tower was very pretty indeed it had four little spires on it of the decorated order, and there was a little Porch and inside the porch a beautiful Norman doorway loaded with mouldings the chancel was new and was paved with tessellated pavement this I saw through the Window for I did not know where the sexton's house was so of course I could not get the key, there was a pretty little Parsonage house close by the church. After we had done looking at the lions of Abury which took us about half an hour we went through a mud lane down one or two fields and last last but not least through what they call here a water meadow is as there are none of them in your part of the world, so for your edification I will tell you what a delectable affair a water meadow is to go through; in the first place you must fancy a field cut through with an infinity of small streams say about four feet wide each the people to whom the meadows belongs can turn these streams on and off when they like and at this time of the year they are on just before they put the fields up for mowing the grass being very long you cannot see the water till you are in the water and floundering in it except you are above the field luckily the water had not been long when we went through it else we should have been up to our middles in mud, however perhaps now you can imagine a water meadow; after we had scrambled through the meadow we ascended Silbury Hill it is not very high but yet I should think it must have taken an immense long time to have got it together I brought away a little white snail shell as a memento of the place and have got it in my pocket book I came back at half past five the distance was altogether about fourteen miles"...............
April 13th 1849
Posted by thelma at Saturday, May 19, 2007