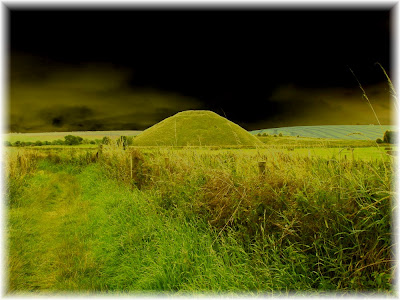 As Silbury Hill is in the public eye at the moment because of the work undertaken to fill and make good the terrible damage it has sustained over the years by tunnelling into its heart, I thought to list the great number of plants that were found from the primary mound.
The thought was provoked by something someone said on the radio, it went thus, to be always dismayed by the terrible encroachment of modern civilisation on our wild and natural places it is well to remember that even the tallest building is built on soil, but that within the soil there can still be found the seeds of yesteryear. This spark of hope, as motorways slice through our archaeological inheritance may be small, but the intrinsic small parts of history still remain and it is well to rejoice in such things.
What makes the list below so interesting is the commonplace nature of the flowers found. Short turf is illustrated by the presence of bugle, trefoil and ground ivy, a pretty tapestry of blue and yellow snaking through the grass, "Colonisers" such as nettles and rosebay willowherb (fireweed) show disturbed land, the nettle always growing, as it does today, on old sites that have a rich nitrogenous soil. Rosebay is supposed to colonise after a fire, so maybe there was burning of trees. Hazel and yew are represented as well, hazel that most useful of tree for nuts and hurdling material, and slow growing yew, now mostly found in churchyards but then it would have been wild in the forests. Its stately grace dark and menacing against the other forms of trees. Water is represented in the sedges and crowfoot, with the damp edged plants such as buttercups. Stitchwort and red campion are wildflowers well suited to growing near hedges, whilst bedstraw and scabious are flowers of the open aspect.