There are quite a few round St. David and Solva but some have disappeared their presence in the landscape only marked by placename such as Llandruidon - The Land of the Druids. Llan is the piece
of land in which the the first founding churches are situated, slightly unspecified it is probably the place of the settlement. The lost dolmens are at Nine Wells, Llanuwas and Lochvane, one that still exists is at St.Elvis farm (double chambered tomb) although a farmer tried to blow it up in the 19th c, pictured here below;- 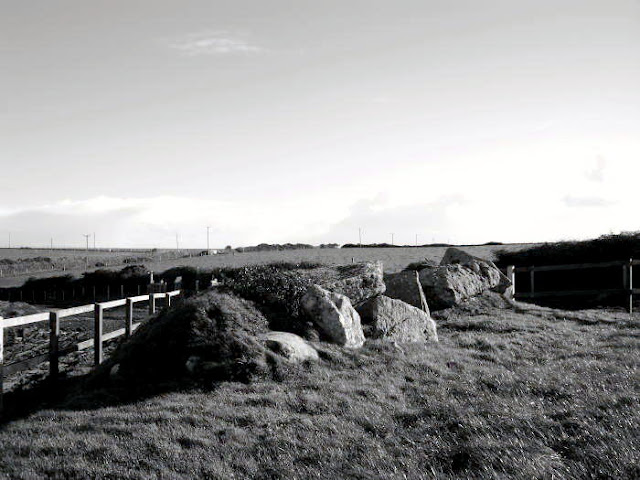 Standing stones are mentioned at Llanugar Fawr, Trecadwgan and Whitchurch (a very old church at a crossroad). There is a standing stone at Tre-Menhir, (Kings heriot) as in the photo below; 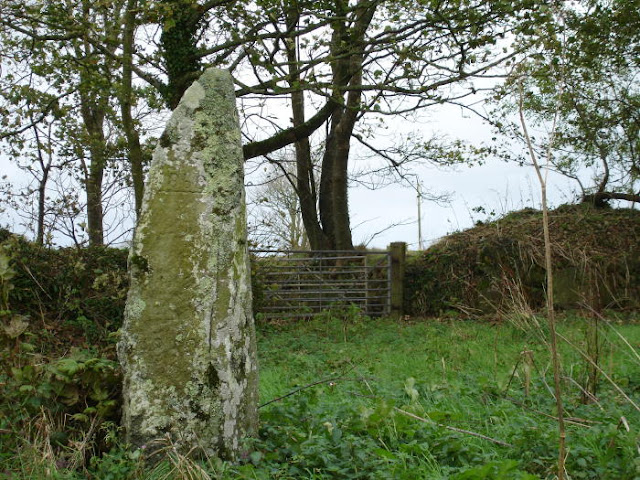 Further along the road are more standing stones at Caerwen. Roughly 6 kms to the east and west of these stones are two further burial chambers, the White Horse Cromlech below;-
also one at Treffynon(SM8536 2866) concealed in a hedgebank., the other at Llanhowell (Llecha cromlech) is mentioned in the local history of the church there. It says;-"On Lecha Farm there are the remains of a cromlech which would have appeared to have sunk into the soil from the weight of the capstone, though it may have damaged by wanton or careless marauders. The capstone measure some 15 feet by 11 ft and is about 4 feet thick."All these burial chambers probably stand in the landscape as a symbol, marking the small territories or land of individual families or clans. They are small mausoleums their orientation seeming to be towards St.David's Head on the horizon.
St.David town is is an especially sanctified place in Wales and to understand the religious significance of this, one has to think in terms of a long "folk memory" that stretches back in time. St.David (550AD) is said to have built his monastery near the present cathedral.
St.Davids Head;On this rock strewn headland there are three cromlechs, firstly there is Coetan Arthur;- (SM7253 2805) an "earth fast" sub-megalithic tomb; its capstone pointing down the valley that runs underneath Carn Llidi and is supposed to resemble the line of Carn Llidi.

It is here in this valley that evidence of celtic field systems have been found, probably relating to the small promontory fort on the headland. Baring -Gould excavated it in 1898.
The following pair of cromlechs are found under Carn Llidi, a bit difficult to find but head for the WW2 footings of concrete and they lie behind there. The capstone of the one below points out to sea. Carn Llidi - SM7352 2789201.The second cromlech capstone, rested on the ledge of the backing rock outcrop;

Refs; A History of Solva by Trevor Bloom.Neolithic sites of Cards,Carms and Pembs. by Geo.Children and Geo.Nash.The Pembrokeshire Coast National Park; Chapter on Neolithic and Bronze Age by G.F.Grimes.
Posted by thelma at Thursday, May 17, 2007