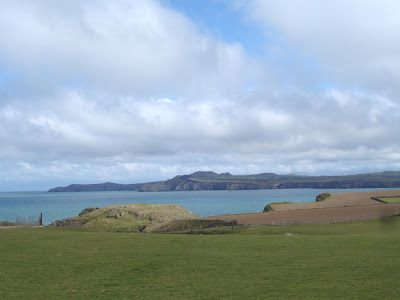 Looking east toward the old farmhouse 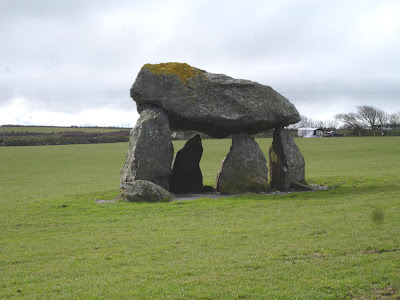 Carreg Samson, my favourite of the three, though this could be to do with its surroundings; chunky is the best way to describe it, standing at the head of a small valley that runs down to the sea, the great capstone perched on three of the seven large uprights forms an oval/polygonal chamber. It dips towards the bay and Strumble Head, dominated by the peaks of Garn Fawr, Garn Gilfach and Garn Wnda, again the siting of the tomb is not on high ground, its reference point seems to be easy accessability to the sea and stream that runs down a few yards away. The chamber being constructed over an irregularly cut pit, stones that may have been found in the chamber could be put down to the fac that it was recently recorded that it was used as sheep shelter and had drystone walling inserted between the stones. There is no direct evidence for a covering mound but Nash suggests that the elongated shape of the stones points to a covering mound, not unlike Pentre Ifan.

The little valley that the tomb overlooks towards the sea
Posted by thelma at Tuesday, May 15, 2007