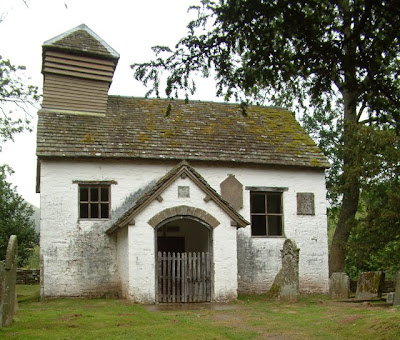 This week a book arrived from Amazon, I had ordered it in April - Fiona McCarthy's William Morris, and had read it before along with many other books on Morris but decided I wanted to own it, over 700 pages long it is the definitive essay on the man himself.
Of course Fiona McCarthy had written another excellent biography on Eric Gill, a man of many talents, sculptor, type face design, print designer, etc. We had even passed the BBC's front door in London on our trip and I had forgotten to look up at the statue above the front entrance. Gill was of course a particularly weird person, and it is best not to dwell on his sexual pecularities but he had lived in a place I had been to several times just by Llanthony Priory, called Capel-y-Ffin, and had used this church/monastic building as his studio and home with his family.
The last time I had been to Llanthony Priory was with my son, when he was about 11 years old. We had wandered round the ruins, and then walked through the fields up onto the mountain (these are called the Black Mountains) above, along an old track. It was memorable only in that we had come to a dead sheep half fallen into a stream. The poor animal had been unable to get up, and her shaggy coat still remained round the skeleton - totally weird. Later as we drove along the narrow winding road to Hay-on-Wye, we noticed a great boulder had rolled down a steep slope and come to rest on the verge, it had gouged the soil out on its way down. This is dramatic Wales, rain sodden, misty, grey, a land of weather and rock, and an extraordinary country compared to the soft South of England.
Of course we wandered round Hay-on-Wye's tatty bookshops, its quite famous now and hosts an annual bookfest where the great and the beautiful go, but it was not so popular a few years ago when Richard Booth declared himself king of this small principality.
So what started this thinking, perhaps it was Jan Morris's - The Matter of Wales book, another good writer, who said of Wales that one only had to take a square yard of its ground and you would instantly understand its history, the meagre soil that covers the hard stony heart of Wales..
Its beauty lies in its wilderness and strangely in its greyness, the patterning of mosses and lichens over stones, the 'greyness' of the many churches and chapels lying neglected amongst luxuriant foliage, the ivy trailing and hugging everything in sight. Wales enters the soul and never really leaves it, and perhaps most of all in its history, the Norman castles that dominate Welsh towns show an oppression to an indomitable Welshness, read the poems of R.S. Thomas, a 20th century vicar and poet and your heart sinks in his gloomy despair, see how 19th century Iola Morgannwyg with his translations of celtic folklore has, and still does, raise howls of despair with his 'druidism', was he actually translating a 'fair copy' or did he make it up along the way....
Jan Morris on the Black Mountains - that range that separates the English from the Welsh...
"When the English writer Walter Savage Landor bought Llanthony Priory in 1808, intending to settle in the mountains, he was soon driven out by the natives... English settlers still sometimes find the inbred pecularity of the valleys hard to manage. It is a queer part of the world, and queer dark things happen there, from incest to inexplicable suicide, from sheep-rustling and bomb laying to whispers og witchcraft. Drifting through the 80 square miles of the Black Mountains you may feel the anxiety of the frontier festering still, its causes long since forgotten, like the indeterminate unhappiness of a house that has known bad times"
Well I'm glad that Morris wrote that, it is a rather gloomy place, but as for its inhabitants he seems a bit cruel or at least, the mythical presence of 'badness' seems to haunt these valleys.
Posted by thelma at Saturday, August 14, 2010