Looking forward to Avebury and Wales 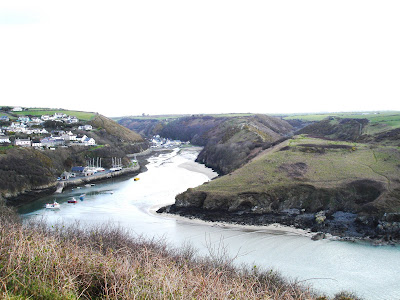 In a couple of weeks time we are down to Avebury for the annual megalithic meet to see friends from around the country, a stay of two days and then off to Solva to stay in a pretty little B&B for a couple of nights so that we can explore the area there as well, though I know it like the back of my hand.
My mind has been going over what we will see, not enough time of course, will we walk down the Nine Wells path to the little cove where the water crashes over the rocks and a small promontory hillfort with its steeply banked side is just along the coast path. Or down the lane out of St.David's to St.Non's church surrounded by its supposed stone circle, a peaceful place still. There is St.David's cathedral itself with the elegantly ruined Bishop's Palace at its side, or the bookshop at the top of the steps to browse. Welsh chocolates to buy and small galleries everywhere, as English people try to make the 'dream' of Wales come true.
What about Middle Mill with the small looms still making Welsh rugs, and tea and cake in the restaurant and the River Solva wandering along at this point under the pack horse bridge. Then further away there is the magnificent Pentre Ifan long barrow its showy capstone poised like a birds wing on the stones below. Not forgetting also Carreg Samson long barrow overlooking the sea and the island where Samson the saint (with his little finger) threw the great stones, to be approached from the little village, not through the farm entrance though. And then there is Coetan Arthur at Newport, snug in its little garden amongst the bungalows.
There again St.David's Head has another Coetan Arthur, this time the cromlech is concealed in a jungle of rocks, you will spy it from afar but get close up and it disappears from view. There are the two hidden cromlechs crouched against Carn Llidi, and what of the promontory fort at the tip of St.David's Head, with its heaps of stone walls still presenting the defence for this small Iron age fort. Or we could walk down the long farm lane to St.Elvis's long barrow just outside Solva, a tumble of stones as a farmer in the 19th century tried to blow them up...
Perhaps on the drive home we could wander past the Presceli mountains, following the route of the bluestones down to the great estuary at Milford Haven, but before we did that we would stop and and see Carn Meini, the great craggy outline that is the source of the bluestone, stopping at the small stones of Gors Fawr circle on the moor below.
Somehow I think two days is not long enough! 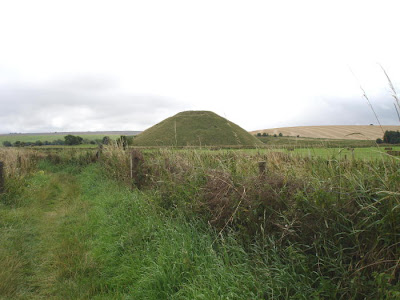 And what of Avebury, so many times visited that I could draw its map, the little Kennet meandering through, Silbury repaired and healing from its affliction of man made tunnels etc.
Tourist ridden now, but in the early days when I got to knew Avebury, it was more deserted a place to walk the dog, park the car and walk to the Lansdowne monument on Cherhill down and the great bounded banks of Oldbury hill fort would greet you. A landscape so strange with its ribbed sides curving and falling from your feet that it would make you dizzy the steepness of the fall. One artist Anna Dillon has somehow captured through her paintings the 'curvyiness' of these downs, it is in many ways an alien landscape, smoothed over by time, golden now I think with the great wheat fields that grace the curves.
The Silbury mound was the first thing to strike me many years ago that it was in actual fact man made, travelling from London newly widowed with a young daughter and no central place to call home, I put roots down in Calne just a few miles on, though my intention had been to move to Wales... Archaeology became a passion, but I studied prehistory through the eyes of logical books, that compared and contrasted pottery, bronze, flints and barrows through long lists that grew tiring and utterly boring. Funnily enough it was a book by Julian Cope called The Modern Antiquarian that gave me a completely different viewpoint, though the book is a gazzetter of megaliths, it also has essays at the front which explored the esoteric nature of such places, made you look at the landscape with a different eye, and for that I am very grateful to him, though his singing is probably not to my taste I admire his writing.
So in celebration of going to Avebury and the fact that Julian Cope in his Address Druidon this month is featured alongside Vybik Jon and Common Era posing with Silbury in the background, and don't be fooled by the clothes, people. Vybik Jon has a wicked sense of humour and a kind heart, whereas Common Era has created a marvellous book, or at least a series of little books, which has as yet not been published I think but was featured in The Journal last year after we met him at the last meeting, and looked at the range of small map books he had created, beautifully boxed and bound.
Posted by thelma at Sunday, August 08, 2010