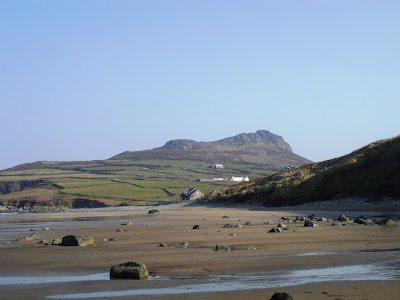 Carn Llidi one of the great gorsedd outcrop, three cromlechs on this headland....

We bought back two presents, one from Wales and one from Avebury. BBs husband chose for us out of their garden two stones for our garden, and now they reside under the maple tree. Why stones? well there is a belief that stones can carry the memory of a loved one, we always mark graves with a headstone after all, how long has this tradition been going on? It may have been so in prehistory. I have written elsewhere of the 'gorsedd' stone, many of the Welsh cromlechs are to be found by a particularly striking outcrop, a shaped jagged rock rising from the earth, in Wales they suddenly rear up from a field and strike the eye unexpectedly. 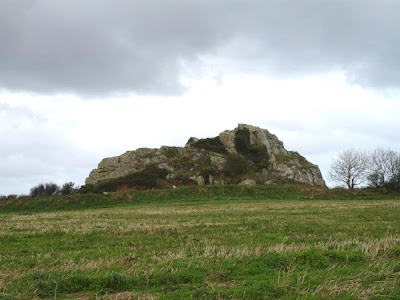 So what was the other present, this was a book from an Irish friend, he had travelled all the way from Ireland to be at the Megameet in Avebury, and had travelled through Wales and stopped off at Hay-on-Wye to look at books, and bought us Ted Hughes - The Remains of Elmet, illustrated by the photographs of Fay Godwin.
Ted Hughes is one of those 'gloomy' poets, an incisive way with words, a deep understanding of the ways of animals and fish, and the brooding Yorkshire moors are evoked pretty strongly in his poetry. Elmet is of course the old Celtic kingdom of long ago....so to the poem

The Ancient Briton Lay Under His Rock

Under the oaks, the polished leaves of Sunday.

He was happy no longer existing
Happy being nursery school history
A few vague words
A stump of of local folklore.

A whorl in our ignorance.

That valley needed him, dead in his cave-mouth,
Bedded on bones of cave-bear, sabre tooth.
We needed him. The mighty hunter.

We dug for him. We dug to be sure.

We need that waft from the cave
The dawn dew-chilling of emergence,
The hunting ground untouched all around us.

Meanwhile his pig-headed rock existed.
A slab of time, it surely did exist.
Loyal to the day, it did not cease to exist.

As we dug it waddled and squirmed deeper,
As we dug, slowly a good half ton,
It escaped us, taking its treasure down.

And lay beyond us, looking up at us 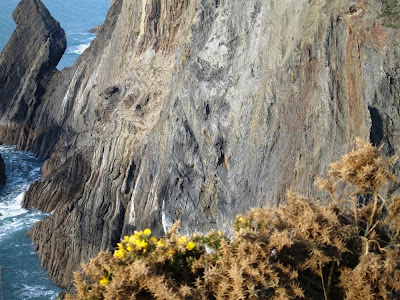 Part of the cliff face walking from Solva, deeply folded rock, born out of fire and water, LS picked up some small, megalithic type stones from the beach to bring home that has the same brown and grey colour, a stone that is used in the building of cottages with such good effect.

Sometimes I question why a particular idea strikes me, gorsedds in this instance was it when I was looking over Pentre Ifan's stones and suddenly realised that there were three stone outcrops above it; its capstone is said sometimes to resemble Carn Ingli (which is the above photo) and my long view with the long barrow underneath the ridge has a vague resemblance....