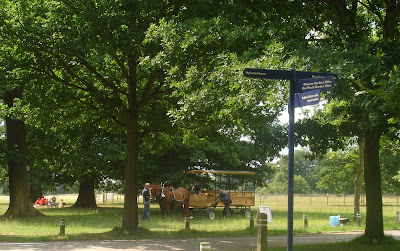 Hyland House fell into disuse in the 1950's and was at one time to be pulled down and the grounds turned into a golf course. Luckily there was enough protest later on for it to be saved, and with the help of lottery money has been restored. So instead of being a place for a handful of people to chase a little white ball around, it has become a place for the public to enter freely, walk their dogs, children, picnic under the trees and generally a place of leisure. Stable block has a restaurant, full of people eating out in the courtyard, with their dogs parked safely under the tables and a secondhand book shop. Plus of course 'events' we went for the craft fair, but really there was only people selling food.
Humprhy Repton drew up the plans for the landscape garden in the 18th century, he did'nt actually undertake any work just handed out one of his little 'red books' with sketches inside. But was the first person to use the term landscape gardener, and he followed on in the footsteps of Capability Brown.

Gardens as we know them don't really exist around the house, the front to have a grand drive with a sweeping front gravelled area for the carriages to stand and turn, the back steps down to the garden below which was well away from the house and had a 'lake', rather small, as the showpiece.  I loved the colouring in the mounded centre but the other beds round the circular lawn were very plain. 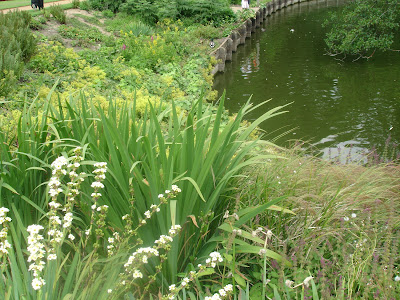