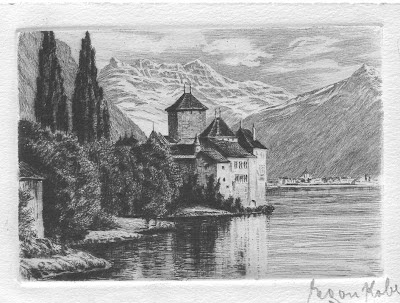 Yesterday I received an email from my son-in-law with the itinerary for their trip to Switzerland in August, just under a 1000 miles from Whitby to Vevey.  It will be a great experience for the children, travelling through France and they all have their passports ready.  Switzerland is a lovely country, steep sided mountains whose grassy meadows are grazed by large beige coloured cows in summer, their bells clonking away.  When I was there they used to bring the beasts down from the summer grazing through the villages decorated with flowers.  All of this  reminded me of my late father-in-law's excruciatingly bad poem he wrote, as he names the villages and towns, I remember drives he took with my daughter and myself up into the mountains for afternoon tea, the fillet de perche restaurant down by the lake, (a upmarket fish and chips) and the lake itself, often so calm but when storms arose (and they came quickly over the mountains) it would become quite dangerous, and the ferry boat across the lake to France would not be able to land its passengers.
He and my mother-in-law  had lost their youngest son, and I a young husband, and the ties between my daughter and my sister-in-laws has always been very strong.  So the children when they arrive will be able to follow my daughter's childhood; travel in the little train up into the mountain, passing Leni's small chalet with its pretty garden in Blonay just under the chateau there.  Leni is long dead, though she lived to a venerable old age, and sparred, mostly over bridge, with my mother-in- law Lotta.
Con worked for Unesco for most of his working life, it took the family to many places, but they retired in Blonay, to Lotta's house eventually. So to the poem, Territet just by Montreux had the English church where Con was a church warden, the vicar would often come to Sunday lunch and to be plagued by the ridiculous tricks Marc (Karen's cousin) and Con played on him, false cakes, false poops and jumping mustard pots are the ones I can remember, the vicar strangely enough got quite cross, but you can see Con's very 'englishness' in the way he writes, Lotta on the other hand was Dutch, and very precise in running her household.  There should be a poem by Byron on the Chateau de Chillon, ther is a little island opposite which if I remember rightly was given to Queen Victoria, so is English territory...


The Tourist's Lament by C.J.Opper

A rainy evening in Vevey,
Fills me with intense dismay,
The faded splendours of Montreux
Leave me feeling rather blue;
And if we must stick to verity,
I don't go overboard on Territet.
And, I must say,
Whoever got hooked on La Tour de Peilz?
For Corsier, Blonay, Chebres and Corseaux,
I'm unequally unmoved or even more so;
If there's a place I'd rather not be on
Its the top of the tower of the Chateau de Chillon.
In Southend they would'nt have the cheek to serve,
That cupper tea we got at Villeneuve
We got fish and chips just beside the church
But you have to ask for fillet de perche.
So..... you just ask your mother why we're here,
When we might have been on Wigan Pier. 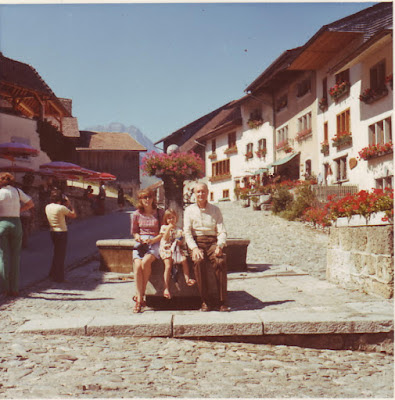