Four days, and a host of memories.  Lower  Solva is my spiritual home, to which I return nearly every year.  Its the sheer calmness that appeals, hardly changing, cottages locked in by tall cliffs, and the harbour with its boats riding the endless green of the sea. Tiny fish swim in the shallow lapping waves, the duck with her young losing several daily to the predations of the seagulls.  Crab and lobster advertised everywhere from bungalow to cottage, I even caught a tiny one, no bigger than my thumbnail as I went shell picking.
A Welsh rug from Middle Mill bought plus some alpaca fleece for spinning, the alpacas live along the lane below, my 200 grams comes from Tiffany.

We did a helluva lot, Aberridy, Porthgain, St.Davids Head and the Prescelis, (and of course seeing Jennie though not for very long sadly as we had to drive a  long way back) the weather quite often dull, but we seemed to miss the showers.  It has given my photos a slightly grey dull edge, quarries were photographed, the beautiful brown-creamy coloured stone that you see in the cottages, and then there is the great deserted quarry of Porthgain grey coloured and used for roads and brickmaking, and the more dramatic dark  slate quarry of Aberridy.  Industries long gone in the early 20th century, hope and aspiration built on the blood and sweat of underpaid labourers; sloops that sailed in, loaded their heavy cargoes and then sailed to Bristol and London.  All gone leaving behind an industrial wasteland being overgrown by the wildflowers and mosses, so that in a couple of hundred years there will be nothing left but the great brick shutes that are built against the cliff at Porthgain.
On St.Davids Head we saw Coetan Arthur megalithic tomb, plus the Bronze Age promontory fort Warriors Dyke with its 6 stone huts.  Prescelis was Gors Fawr stone circle, plus an exhausting climb up Foel Drygarn, to to see the three great stone Bronze Age cairns, plus of course the view to Carn Meyn, the source, or so it is said, of the bluestones of Stonehenge, and I also noted the position of Carn Alw, which is supposedly a chevaux de frise - defended by upright stones along the entrance, could have been an iron age holding pen for horses and cattle... somewhere I want to go, but it was quite a walk.
Each monument will be gone into detail eventually as I always get muddled with all the various Welsh names. 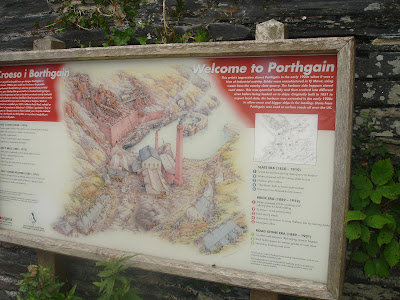