Clearing the mind and sliding in to that created space, a web of waters streaming over rocks, air misty but not raining, seeing this land from a boat on a lake or a broad slow river, coasting by.

December 1st, the first day of winter and also Advent.  Not so icy as yesterday morning but cold the windscreen of my car is iced over.  Hopefully it will melt before I go to pick up my daughter from the station.  Plus, hopefully there will not be any work on the road as there was a couple of days ago.  Patch working the road of course. 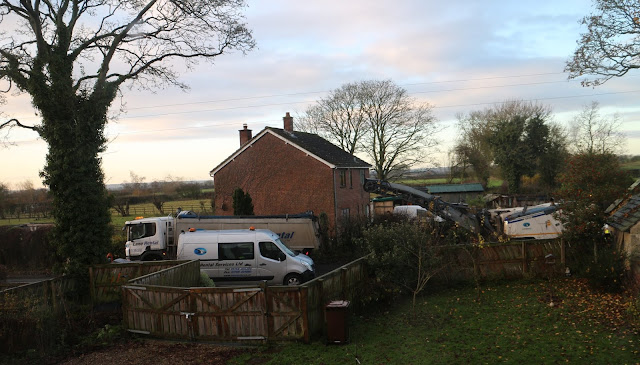 Corbyn is coming to York today, well I have already made my cross on the postal vote and it is once more thrown away on the Greens, so he will have little luck with me.  This is a conservative area, last time 60% cons and 26% labour and lots of little lines for the rest of the parties.  I cannot contemplate the Liberals, two reasons really, the betrayal of the student loans, and their present leader, Jo Swinson - too enthusiastic by far.
Two days ago at midday coming back from a friends house I heard the sound of geese overhead flying South, clever creatures were escaping the cold coming from the North. This skein of flying birds was something to behold, and calmed my day.
I have been spinning wool, and I think silk, which I bought from a new supplier, the wheel has a soothing effect rather like the geese.
The soft warm light of early morning is spectacular, frozen fields of white but the trees have a soft amber glow.
The news again is terrible the killing of those two young bright Cambridge people.  Their lives cut short by a terrorist and everyone debating the consequence of religious fundamentalists.  The good thing is that there were  brave people to take him down.  And also calls for restraint from the newspaper articles, the garbage they write about.  What we don't what in this country or on the street is vengeance, and the police handle such incidents fairly well.  We are a multicultural country, many people from other countries come here, there are a few bad people amongst them but then look at a far right 'British' thug, and judge them.

Jack's father in the Guardian - Jack would be livid his death has been used to further an agenda of hate.


"That door opens up a world where we do not lock up and throw away the key. Where we do not give indeterminate sentences, or convict people on joint enterprise. Where we do not slash prison budgets, and where we focus on rehabilitation not revenge. Where we do not consistently undermine our public services, the lifeline of our nation. Jack believed in the inherent goodness of humanity, and felt a deep social responsibility to protect that. Through us all, Jack marches on."