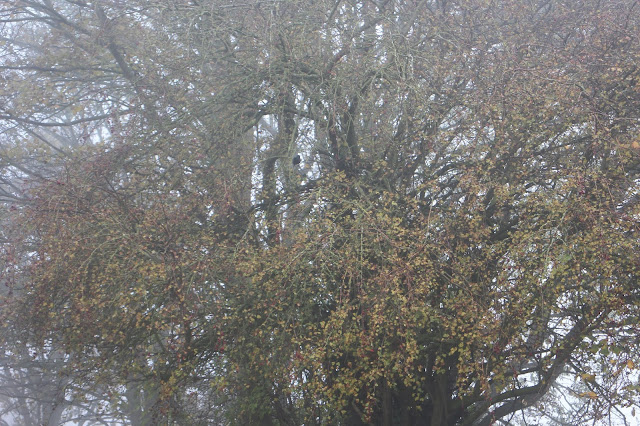 Watching the birds out of the window and thinking they had stripped the old hawthorn of the plentiful supply of haws or hags.  I noted that there was about a dozen blackbirds flying back and forth feasting and also I think the mistle thrush, though for one moment I did think it was a fieldfare.

Haw/Hawes;  The name Haw is tied to the ancient Anglo-Saxon culture of England. It comes from the Old French personal name Haueis and the Old German personal name Hadewidis, which literally means battlewide

Whore; A prime example is the case of the root *kā–, "to like, desire." From it was derived a stem *kāro–, from which came the prehistoric Common Germanic word *hōraz with the underlying meaning "one who desires" and the effective meaning "adulterer." The feminine of this, *hōrōn–, became hōre in Old English, the ancestor of ...

It is just funny how one word sounds exactly like another and yet have totally different meanings.  The hawthorn has been stripped now of every red haw, and suddenly I am reminded of the Glastonbury thorn story, which supposedly flowers at Christmas.  Brought to this country by Joseph of Arimathea, and apparently Jesus who tagged behind as a boy in this Glastonbury myth. Grigson says that this thorn had developed into two trunks, one of which had been felled towards the end of the 16th century, the other during the Civil War of the 17th century, this recorded by John Aubrey in his 'History of Wiltshire.'

But Grigson recorder of small but fascinating facts, says sex enters into it because of the sweet but sickly smell of the white blossoms which contain trimethylamine in its scent.  Hawthorn, white thorn, May thorn, when a young man's fancy turns to marriage?

And for Ireland it has a magic because the fairies live by and under the thorns, explore any Irish tales, as William Allingham points out...........

Yes we near  the time of Xmas, with its dire warnings due to the cloud we live under. Now on the radio farming programme this morning,  fresh food held up at ports and schools should keep long lived supplies.  I think you would call this thinking the worst but I think I shall grow some bean sprouts as winter vegetables just in case.  My tri-coloured Christmas cactus already heralding the day.... 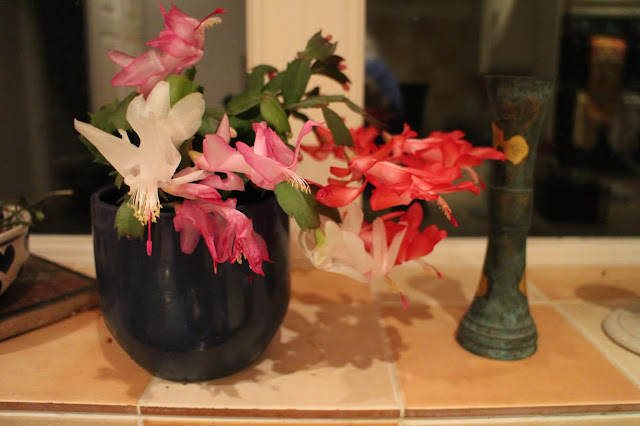