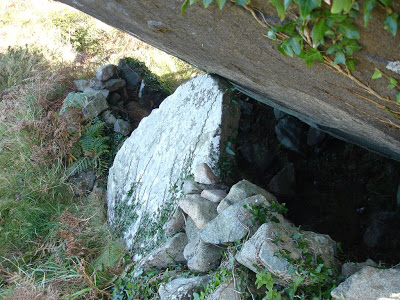 And on this day?  Something Radio 4 does every morning as they look back on the history of one particular day.

Jo will ring the church bells twice, first before Prince Phillip's funeral service and then before the one minute silence.  Unfortunately I shall be queuing in Pickering for my second vaccination but I can watch later on.

I am happy for him that he planned his own funeral, the Land Rover, the wool coffin, he made an ecological statement even in his death, not wanting a State burial.

I was going to write, once more! about Garn Wynda cromlech, situated on a rocky outcrop above a village looking out to sea.  It is hidden in the jumble of rocks, but all along this Pembrokeshire coastline such cromlechs are to be found.  One of the things I notice about other people who go to see it they always start from the village, whereas I travelled along an old grassy  path from a lane.  It was interesting to see two derelict houses along the way and an old school deserted sitting alone in a field, and thinking about the people who must once have attended the school. 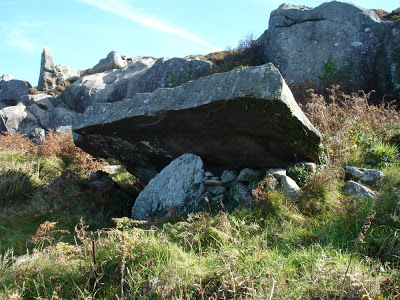 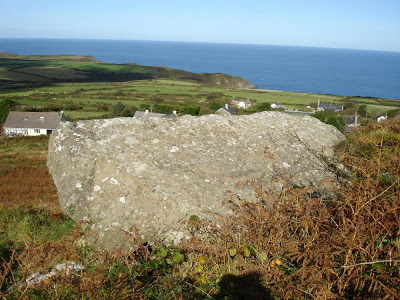 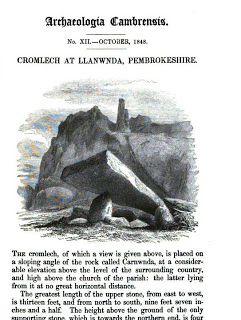 It looks towards the sea and you will often find these old burial places strategically placed in the landscape with a view.  The above Victorian plate shows the tall pointy rock above as does my photo.  The writer thought that it was dedicated to a god, but he was right on one level, you can locate the triangle capstone in the landscape beneath it.

Makes you think how we have not progressed very far with our own  gravestones and obelisks.

One theory for stones, tall and straight - phallic, the triangular shape - female.  This can be seen, if you believe that is, along the Avenue at Avebury.  But funnily enough down in Cornwall amongst the stone circles you will find the odd female triangle stone as well.